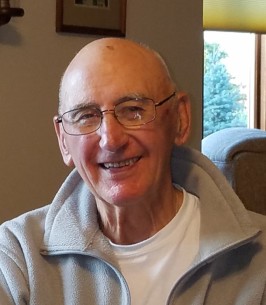 Larry was born on July 9, 1935 to the late Joseph and Pauline (Mayer) Hoffmann. He grew up in Hartford, attended St. Kilian grade school and graduated from Hartford High School in 1953. He was a life –long resident of Washington County.

On May 4, 1957 Larry was united in marriage to the love of his life, Charlotte Rusch. They were married at St. Francis Cabrini in West Bend and were blessed with 62 years of marriage.

Larry enjoyed tinkering on engines, fine tuning them to run smooth. His love of engines paved his way to beginning his career with Detroit Diesel Allison for 36 years. He began as a mechanic, working on huge mining equipment, yachts, and trucks. He furthered his career with the company retiring in 1999 as a Sales Engineer.

One of the other parts of his life he was most proud of was serving his country in the Wisconsin National Guard for 17 years; served on active duty from 1961-62. He retired with the rank of Captain and was a member of the West Bend American Legion Post 36.

He was civic minded. He served on the West Bend Housing Authority Board of Directors for 15 years. He was elected as a Washington County Supervisor and held the position for 6 years, also served on the City of West Bend Ethics Committee.

Larry had many hobbies. One of many things he enjoyed was high power rifle marksmanship at the West Bend Barton Sports Club. He also enjoyed fishing, photography, traveling and a cup of coffee with friends. But his greatest pleasure in life was spending time with his family, grandchildren and great-grandchildren.

He is further survived by his sisters, Loretta Pauly of Sun City AZ. Joynell Becker of West Bend, Jeanette (Donald) Warnecke of Wausau, WI. Sister in law Erlene Brehmer, of Little Chute WI, close nephew Rick Rusch of West Bend along with many other nieces, nephews, other relatives and many dear and close friends.