Slinger is also proud of Pun Worakulpisut, a foreign exchange student from Thailand. He raced for his first time ever. Great work Pun! The course was extremely slick and rutted, which made it even more difficult for racers. The conditions were questionable going into the weekend, but ended up with no severe storm.

Falls were commonplace by many racers on other teams, but with looking at the results the 2020 Slinger Snowboard Race Team had some of the strongest and most talented snowboarders in the Midwest.

Below is a photo of the Slinger Snowboard team at practice before the race this weekend. 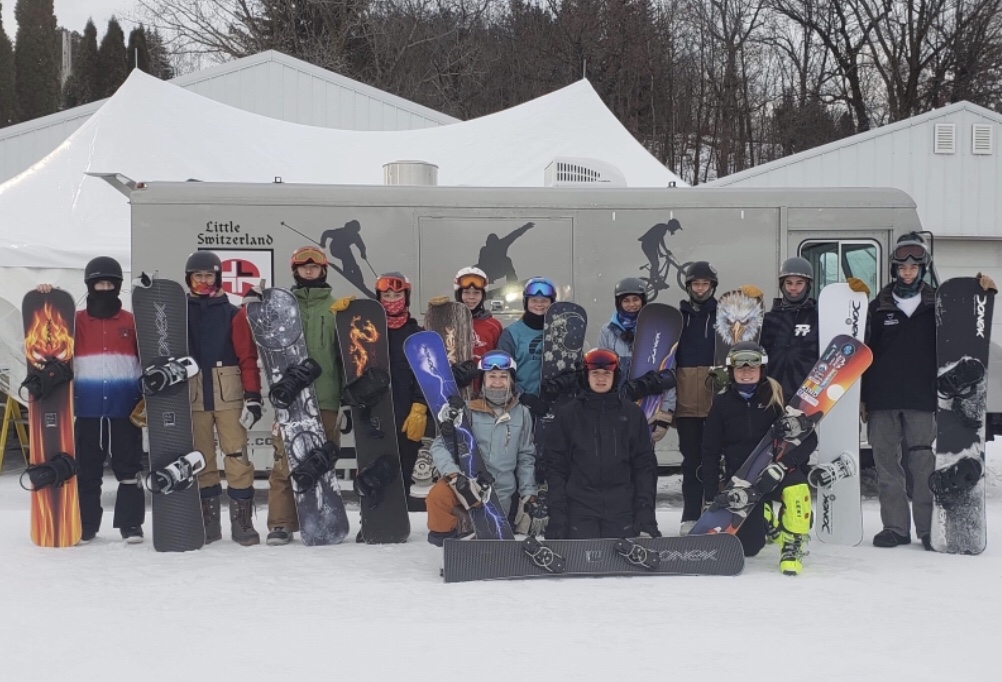 Also pictured is past SHS student reporter Lexi Bullis, who came to visit and use this photo to help with her Donek Team sponsorship. Look at all those race boards. On a personal note, I recently received results from my MRI scan.  Unfortunately I am unable to race for the Slinger Snowboard team this season, as I am out with a torn ACL ligament and meniscus in my right knee. I will continue to write about my teammates and other friends I have raced with as a substitute for the sport I truly enjoy. I will continue to submit updates letting everyone know my progress and healing has been going. Student reporter: Delaney Braun, 15, is a freshman at Slinger High School – I am a die-hard snowboard racer, who loves anything to do with heights, speed, and of course snow. Snowboarding is my true passion, but I also enjoy skiing and playing competitive soccer with Washington County FC soccer club. In my off seasons, I enjoy spending time with friends and family on the lake while wakeboarding and I also absolutely love my job at Expedition Supply fixing bikes and you guessed it… snowboards. I have a calling for adventure and new opportunities.