July 7, 2019 – Big Cedar Lake, WI – In October 2014 a hand-painted mural by Beryl Timmer was rehung at Timmer’s Resort. The mural depicts some of the common items around the property on Big Cedar Lake that Beryl treasured. Below is the original article that ran in Around the Bend on Oct. 6, 2014. 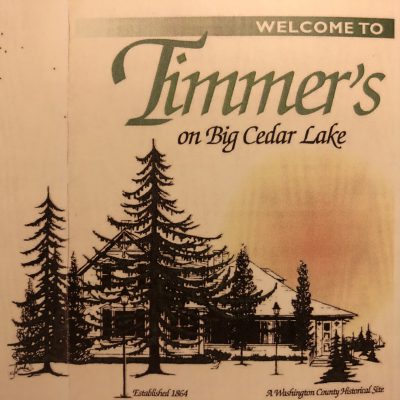 This hand-painted mural was created over a series of months in 1953 by Beryl Timmer. A city girl, she married her husband John and took over operation of the 12-room Timmer’s Hotel in 1940. 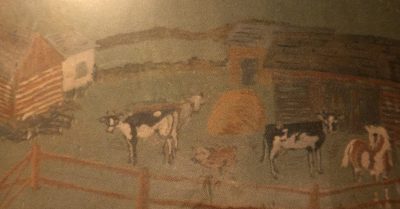 The mural, originally 36-feet long, was designed to hang over the bar at Timmer’s. “She wanted to put the painting along the longest wall, in the back of the bar up near the ceiling,” said daughter Barbara Timmer Jaeger.

In her late 30s, when she began painting, Beryl normally worked on the mural in winter when the hotel was not open to guests and people rarely held parties.

“She had pieces of the mural spread out on the dining room floor of Timmer’s Big Cedar Lake Resort,” Jaeger said. “She needed the space. It was easier than having it on an easel but she always warned my brother Jack and me to be careful we did not step on any of it.”

A hobby painter, the inspiration behind Beryl’s folk art was captured from old black-and-white post cards of the resort.

A palate of dark greens and browns was used to follow the progression of construction at the lake starting in 1864 with a little log cabin farm house and a walkway to a small red barn. “The property was located closer to the creek on Big Cedar Lake,” Jaeger said. 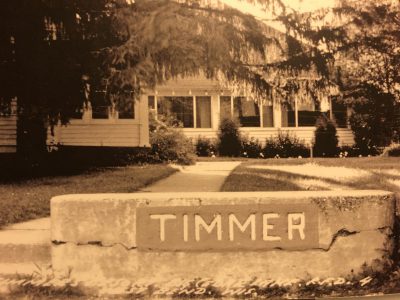 A simple split-rail fence is a common theme in Beryl’s painting along with mature trees of cedar, maple and oak surrounded by waves of thick, green grass.

Jaeger noted the “little things” her mother wove between the color pictures. “There was a gold outline of a pitcher and bowl used in the hotel and annex; that was back before running water,” she said. Other items include an old clock, a content owl, and a Blanding’s turtle.

Midway through the mural, Beryl notes the development of cottages with chimneys that soon expand to a grand three-story home with covered porch. Comfortable details include black ivy creeping up a door frame and the barrel of a water tower overlooking the red-roofed cottage. Items outlined in gold include a surrey with a canopy top, a bi-level cast iron stove, water pump, four-legged stool, and a vintage farm mailbox.

Daily items that made up Beryl’s life at the resort were also featured including a chicken and egg, high-heeled buttoned boots, a hand-crank coffee grinder, and a glass lantern.

The 1901 vignette highlights the Pebbly Beach house with canoes and a pier in the waters of Big Cedar Lake. The cozy lakeside setting also includes long underwear flapping on the wash line, a happy frog on a lily pad, small animals that could be seen from the kitchen window, and three fish arching out of the water.

Beryl’s painting was rescued prior to the 2008–2009 remodel of Timmer’s by George and Judi Prescott. The mural has now returned home with the beer barrel chandeliers and large stone fireplaces, helping preserve the flavor of the 150-year-old lake resort.

Below are individual write ups about the segments.

Beryl Timmer’s paintings captured the cozy lake-side hominess of cottages and cabins and split-rail fences. Barbara Timmer Jaeger said her mother painted the mural on the floor of their dining room in the winter of 1953. “My brother Jack and I had to stay away so we didn’t step on it or knock over paint.”

An untrained artist Beryl Timmer used warm colors to document the historical perspective of the slow progression of development surrounding Timmer’s Big Cedar Lake Resort. Log-cabin cottages soon gave way to large three-story homes with rounded window frames. The true colors of mural can be seen on the top and bottom sections as those pieces were covered by molding.

The painting by Beryl Timmer shows the development of the property and progress in an era when travelers traded horse-drawn livery service for a model Ford with wooden-spoke wheels. The mural is a tribute to the history and heritage of Timmer’s in Washington County and the longstanding tradition of welcome and relaxation at the lakeside resort. 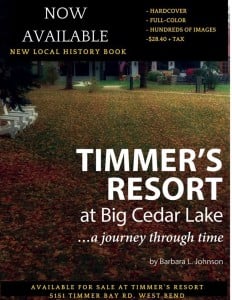 To read more about the history of Timmer’s and Big Cedar Lake pick up a copy of Barbara Johnson’s book “Timmer’s Resort at Big Cedar Lake… a journey through time.”