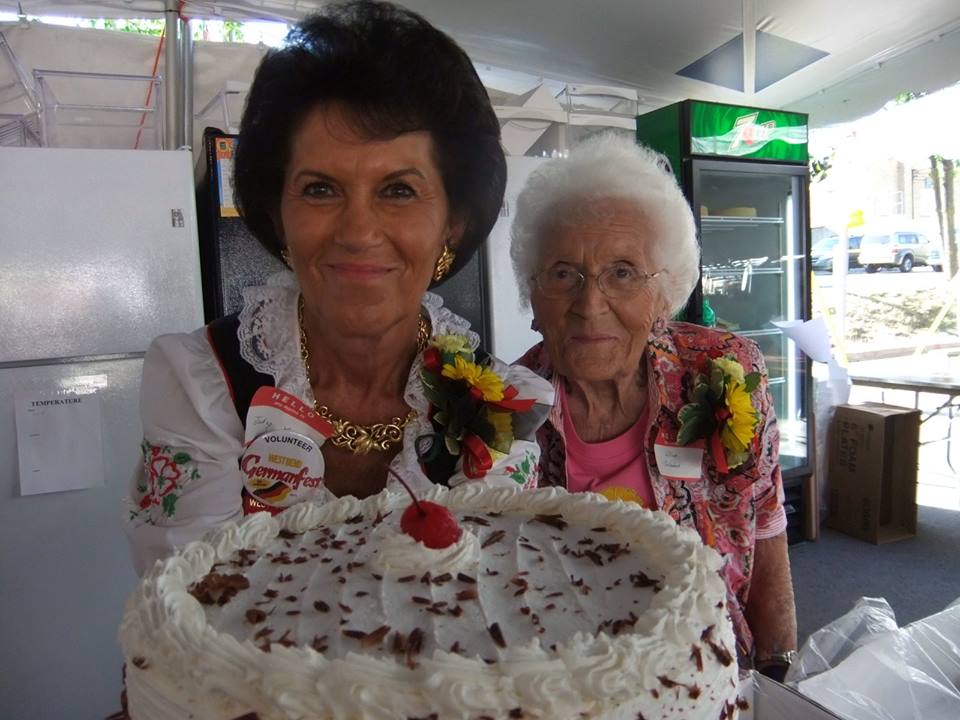 Nowhere is that saying more appropriate than in the sugary vista of selections in the dessert tent at Germanfest; specialty pastries, decorated cakes, fruit-filled strudels, flaky turnovers and tortes.

Judy Etta has been the dessert Frau since the third year of Germanfest. Accompanied by her mother Lillian Oelhafen, the pair served the most decadent fare at the festival.

“I come from a German heritage and my mother bakes – she did wedding cakes for years and years,” said Etta explaining how desserts came naturally. “You didn’t go out and buy bakery; I grew up in that environment.”

Etta credits Ruth Slessar, a home economics teacher, with providing “excellent ideas” on what to serve.

“That first year I had a genuine Sacher torte from Harter’s Bakery. It had the medallions on it and it was chocolate and wasn’t made with regular flour.  Anyway, you can’t get it anymore but that was one of the pieces people just loved,” said Etta.

Taste-testing was a part of the job, but Etta said sometimes it wasn’t all what it was cracked up to be.

“I asked Keith Hankerson to do a black forest torte and Ruth and I tried it and we didn’t like them,” laughed Etta her voice rising a couple of octaves.

A rum cherry torte was also a challenging treat that didn’t pass the test. “Ruth said it had an imitation flavor and her standards were so high, she would settle for nothing but the genuine thing,” said Etta, acknowledging that Hankerson slaved over the recipe until it met Ruth’s satisfaction.

“I look at what we put Keith through and who would want to do that; we had him do-over the almond horns four times,” said Etta.

One year the Germanfest committee was adamant about cream puffs. “I dubbed it the cream puff episode because they all wanted to switch from what we had been serving… so I went and bought cream puffs from different spots so they could sample,” said Etta .

After the taste test, Etta took votes. “It ended up they all liked the one that we had,” she said, noting the winner came from Hankerson’s.

Through the years Etta has rolled out a red carpet surprise selection of desserts, including a bienenstich torte (bee sting cake), German chocolate cheesecake, pumpkin cheesecake and cherry slice.

“Judy Etta would go out to find the best cheesecakes or the best desserts and we made it a requirement that she’d have to let us taste test them and that was fun.” Lisa Neumann, former Germanfest committee member.

“Oh yeah, German beer and German bakery mix. You can have a couple beers before you bake.” Keith Hankerson – Hankerson’s Country Oven Bakery

“When Germanfest began the bakery and desserts were priced at $1.50 and now they’re up to $2.50.” Judy Etta

“We used to make a beer rye bread and it was real distinct. Instead of using water you replaced it with beer and it had a real interesting flavor. There is basically no alcohol by the time you’re done because it evaporates out. We made it so long ago – I know we didn’t use Lithia; we probably went with some of the cheapest beer you could find.”  Keith Hankerson