I attended a meeting 02/25/16 at UWWC, “Preventing Gun Violence in Wisconsin” offered by the Peace Seekers of Washington County.

The presenter was Jeri Bonavia, a registered lobbyist and Executive Director of Wisconsin Anti-Violence Effort. The entire presentation was anti-gun and filled with what I thought were distortions and untruths.

Ms. Bonavia stated that approximately 660,000 U.S. war deaths occurred from the revolutionary war forward. She then said the gun violence deaths in the last 20 years in the United States has now exceeded that number. 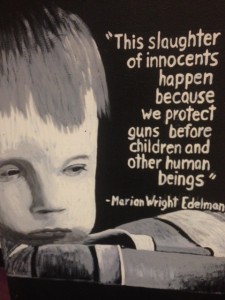 I asked why they direct their ire at guns when the underlying factor is “people” violence. I asked why law abiding firearm owners should be denied the opportunity to defend themselves, hunt or recreate in order to eliminate the acts of a few outlaws. As an analogy I asked if I could deny them the air bags in their vehicles and thus the protection the air bags provide.

Part of the presentation furthered the notion that in order for the public to feel, and be, safe, guns needed to be removed from society except for the military and government officials. I wondered how the minority folks in Poland and Germany felt about that in the late 1930’s early 1940’s?

You should know this group exists, is well funded and very active. The Joyce Foundation funds WAVE to the tune of at least $340,000. They also have the ear of BHO. They also advocate removing Senator Ron Johnson.