Munster, Indiana and along the lake shore in Chicago, then to Kenosha was my intent. 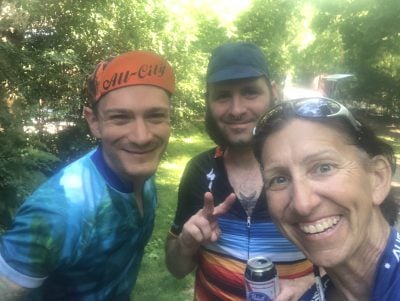 Kenosha had zero accommodations so I buckled down after I ran into Will and Phil. They were pedaling from Chicago to Milwaukee.

”We’ll drink beer and have different scenery,” said Will.

I hung with the pair for a bit and then dropped off. Caught them again up the trail where I thought they stopped because of some mechanical issue.

”We’re just having a celebratory beer at the state line,” said Phil, holding up a 16-ounce Pabst.

I love their style of bicycling.

By the time I got to Ryan Road I had to call for an assist. There was no shoulder, my headlight ran out of juice and it was too risky to ride.

“You look like you’re homeless,” she said, as I loaded my rig into her vehicle.

She dropped me at my other sister’s place in Franklin to spend the night.

I unloaded my rig. “You look like you’re homeless,” said sister No. 2.

We all seem to be cut from similar cloth.

A beer with the brother in law and some Brewers therapy, a quick rest and I should drift into West Bend this afternoon.