Home  »  Uncategorized   »   A love story in Barton: If you must love girls, love Barton girls
— 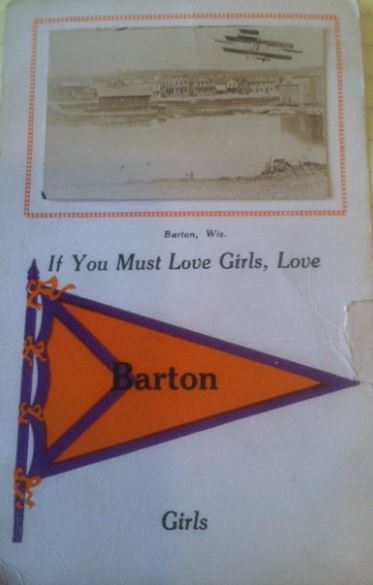 The night air in Barton was growing a bit chilly. Signs of fall were starting to creep across town as leaves were beginning to turn a burnt red, orange pumpkins were nearly ripe for picking and the chirp of crickets seemed to carry a bit farther.
Hank and Essie sat by the Barton Dam looking up at the stars. The sky was clear and the evening pleasant.
“I should have brought a sweater,” said Essie as she stood.
Hank was on his feet quickly. He pulled up the blanket and shook out the grass. “I think I’ve knocked all the spiders out if you want to cover up with this,” he said.
Essie eagerly took the blanket and welcomed the warmth.
The pair walked over the bridge, chatting about the upcoming Paws in the Park in Jackson and reminiscing about their first date when Hank set some candy on the porch wrapped in brown paper and string and Essie confessed about trying on a number of dresses because she wanted to look just so.
“Found this in grandma’s junk drawer the other day,” said Essie as she pulled a tattered post card out of her pocket.
There was a photo looking across the river in Barton. Below it a saying, “If you must love girls, love Barton girls.”
Hank took it and laughed.  “I like the pennant,” he said.
Essie gave him a shove with her shoulder. She knew Hank was fond of her ….  She did like his boyish good looks, his charm and even-handed demeanor. He wasn’t like the other boys. He was respectful and patient and fun to be with.
Essie clutched the blanket in one hand just below her chin, her other dropped to her side and she reached for Hank’s warm hand. He took it so naturally as they walked in stride.
From half a block away Essie could see grandma had already retired for the evening. The window above the porch was dark. The bells at St. Mary’s Church chimed and tolled the late hour.
“I had a good time tonight,” said Essie. “Thanks for letting me hog the blanket….. oooh I can’t believe it’s getting chilly already.”
“You wore that plaid blanket like a Hollywood starlet,” said Hank with a grin.
As he rolled the blanket into a ball and shoved it under his arm, he leaned over and gently gave Essie a kiss on the cheek.
“I’m going to keep this post card for a bit,” he said… holding it above his head like a winning lottery ticket.
“I think I’m loving me a Barton girl!”
History on the Barton blacksmith shop
A couple weeks ago there was a story about newspapers from 1886 found lining to walls of a home on Barton Avenue. 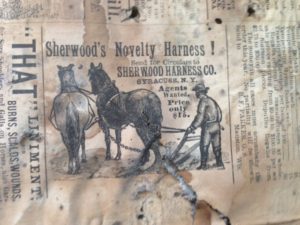 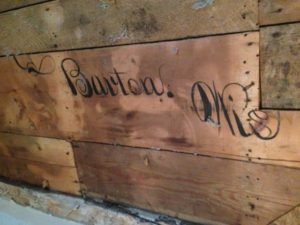 The newspapers include The Farm and Fireside, The New York Weekly Witness, and a paper from Wisconsin published in Milwaukee. The newspapers line the wall at the bottom of a stairwell in what once was the blacksmith shop. 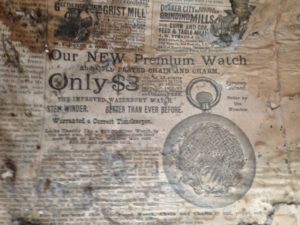 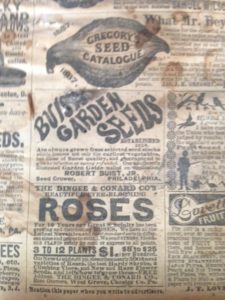 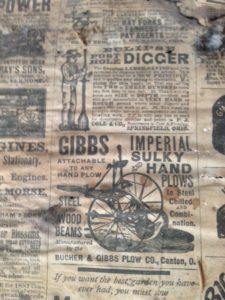 Up the stairwell built into the south wall was a wood panel from a shipping crate stamped Barton, Wis. On the far corner of the panel was a small-case letter ‘r.’

According to the book Josiah Taylor (1754-1838) by Linda Taylor Stark it appears the blacksmith shop where the crate was found was once home to a Charles and his brother John Roots Taylor.

The flowing paragraphs are from Taylor Stark’s book.

“Charles was a carpenter and the two brothers erected a building in which they housed boarders for four years. They also started a blacksmith shop and made wagons. Later, Mr. Taylor was a dealer and sold farm machinery.

His first blacksmith work of any importance in the West Bend area was the iron works on the first gristmill. The Blacksmith trade was very hard and complicated work. He manufactured his own horseshoe nails and many other articles which were needed in the blacksmith shop. He shod all the oxen in the County within a 25-mile radius.

John Roots Taylor took a $10 premium at the State Fair for the best pair of horseshoes. His wagons and blacksmith work were well known in many states, getting orders from Michigan, Illinois, Iowa and Minnesota for bob sleighs and wagons. His manufactured vehicles were hauled to Allenton to be shipped by rail.

John purchased most of the poperty situated behind Lots 2,3 and 4 from Barton Avenue to the Milwaukee River and that is where his farm was located. The house they occupied still stands on the corner of Barton Avenue and Roosevelt Drive next to the old bank building (currently Woodland Iron and Firearms).

His blacksmith shop was replaced many years ago by a dwelling. His barn was southeast of Barton Avenue and the lane over which the cattle were driven to pasture is now Roosevelt Drive East.”