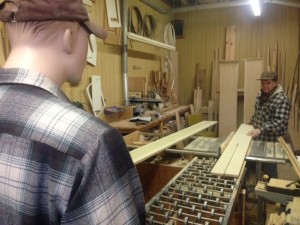 Hank looked at the clock on the wall. Father time was moving painfully slow today.

“If you don’t tend to business now – you’re going to stay late until we’re though,” yelled Jeff over the whir of the table saw. His voice was muffled by the din of the house vacuum but Hank got the message.

He had his second date tonight with Essie. She left him a note on his workbench mid-week. She had perfect penmanship. Hank carried that note in the pocket of his bluejeans every day. The white notepaper, which had been folded twice, now looked a little dog eared as Hank must have read it a million times.

Next door Essie had been working to finish the spring-themed window.  She propped up the old metal gate, added some over-sized yellow and orange flowers and placed the letters that spelled S-P-R-I-N-G in the individual window spaces above her rope swing. 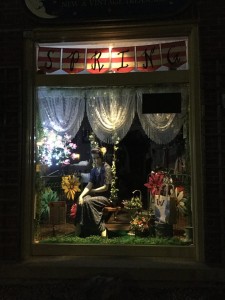 “If that boy keeps feeding you – you better put a crate under that swing,” barked Deb. “I don’t want you pulling that right outta the ceiling when you’re window dressing.”

Essie didn’t have time to worry about her figure as 10 ladies dressed in red hats and purple coats came through the door.

Essie’s head was in the clouds that day too. Tonight was one of the last St. Mary’s Fish Fry where proceeds benefit the school.  The gathering had been an end-of-the-work-week tradition for many parishioners during Lent.

“I’m hoping to see a lot of my friends there tonight,” said Essie.

Her grandma had volunteered to help in the kitchen and Essie knew they’d start serving at 4:30 p.m.

Essie’s grandma was hoping for a huge turnout as neighbors and parishioners would show their strong support for the parish. 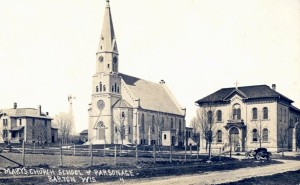 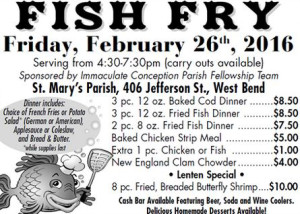