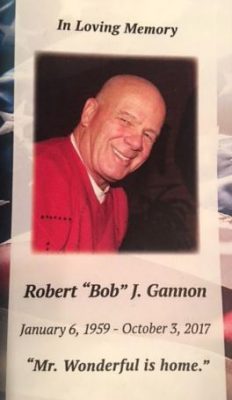 During the security check Gambucci was pulled aside by TSA. Several other TSA arrived, talked in hushed voices, and then turned her over to the Milwaukee County Sheriff.  Gambucci thought she got busted for a pocketknife until the Sheriff told her otherwise. “It looks like you have ammunition in your purse,” said the Sheriff’s deputy.

“But I don’t even own a gun,” said Gambucci. Then it hit her. “It’s Bob!”…as in former state Assembly Rep. Bob Gannon.

A bit of the back story: Following Gannon’s untimely death, his remains were cremated and his wife Kris filled spent bullets with his ashes. Gannon was a big advocate of gun rights and this way his friends could have a piece of Bob to remember him by.

Gambucci received one of the bullets at a Rotary meeting, dropped it in her purse, and there it stayed.  “I could just hear Bob’s big laugh in my head,” said Gambucci. “He would love how ridiculous this situation was and the trouble he caused. It seemed like a prank from heaven.” The Sheriff eventually told Gambucci she could have “Bob” back since the TSA agents believed her story.

“Who could possibly make that up,” she said.

The next conundrum was what to do with Bob since she had to fly back from Atlanta the next day. Throwing the bullet away was not an option, out of respect, but Gambucci told the story at a business dinner that night and a client thought it was great and offered to keep Bob on her desk.

Since Bob loved publicity Gambucci thought it was a great idea, so as soon as she got back to the hotel she sent links that were “All about Bob” so the bullets new owner would have the appropriate back story of who Bob was.

Another Rotary member offered Gambucci his bullet, but she refused for the time being.  “I am flying to Florida for the Orange Bowl and don’t want to risk a repeat,” she said.