In
Washington CountyAllentonTown of Addison

April 22, 2021 – Town of Addison, Wi – The construction project on CTR W in Allenton at Highway 33 just hit another snag as a watermain break has caused water to be cut to neighbors west of CTH W.

Allenton Fire Chief John Breuer said, “the contractor hit the watermain on the intersection at Highway 33.” 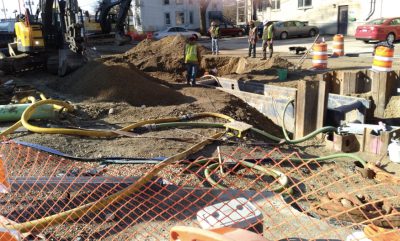 At 5:45 p.m. the company responsible for installing the new water line and sewer piping on Railroad Street, County Road W, struck the watermain at the intersection of CTR W and WI-33.

At 6:30 p.m. it was determined the businesses and residents west of Railroad Street will be out of water for a period time.  It is expected a portion of WI-33 will have be open up to make the repairs and the crews will be working into the night.

Contractors will reportedly work through the night to fix the issue as water service has been cut to the subdivision west of CTH W.  Romie’s BP station also does not have water.

The construction project at Highway 33 and CTH W has been underway since March 8, 2021. The project was to be completed in two stages. Stage 1 from Hillcrest Drive (East) to STH 33 and Stage 2 from STH 175 to Hillcrest Drive (East). Michels Corporation was going to grading, asphalt, curb and gutter, sanitary sewer, water main, storm sewer, culvert pipes, acceleration/deceleration and bypass lanes, and sight line improvements.

By March 12, 2021 the project went south when contractors working to put in a manhole assembly on Railroad Street just south of Highway 33 had a sidewall give way. Witnesses said a huge geyser shot up as a pipe was pulled completely out of the valve assembly.

The incident emptied the 350,000 gallons in the water tower as the hole on Railroad Street filled with water coming in a 115-pounds of pressure.
Michels Corporation had been working on de-watering the underground area to help move the utilities project along.
This is a working story and more information will be posted when details become available.
According to County Highway Commissioner Scott Schmidt the project is about 4 weeks behind schedule.  Schmidt also debunked a rumor that the Town of Addison was being sued in connection with this project.  He said that is not true.
Earlier Thursday, April 22, 2021, Schmidt spoke about the challenges with the project.
“The issue right now is the sanitary sewer,” he said. “The contractors hit high groundwater, since the area is built in a swamp, and so they had to dewater. They hit some silty sand. Just south of CTR W and under Highway 33 the DOT went out and open cut the road – cutting a trench and did some boring to replace the sanitary sewer. 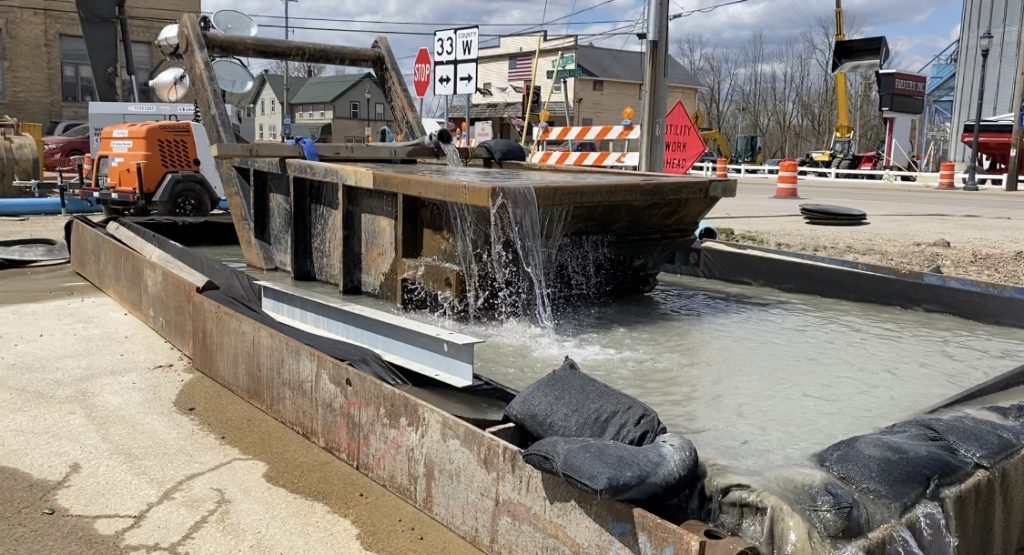 “Now Michels Corporation was going to come in and do a boring casing where they would push the metal pipe in the trench and then put another pipe for sanitary sewer in there.”
“Once they get that through they will be able to head south and get that sewer relayed.”
That progress now has hit another snag and crews are working to fix the watermain.

Schmidt confirmed the water being pumped out of the hole dropped the road and the sidewalk. “Once they get the trench backfilled they may have to mud jack the area,” he said.

Schmidt said the big above-ground square pool is water that’s being pumped out of the hole aka dewatering the site.

“The groundwater is 4-feet from the surface and contractors are digging down 15 feet so 10 feet of water is being pushed out of the hole, similar to a sump pump,” Schmidt said. “The DNR requires the water be treated so the water is going into a settling basin before it goes into the storm sewer.”