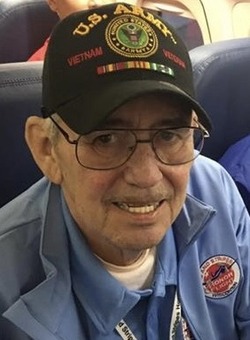 Tony lived his life in Nenno, attending Slinger and Hartford Schools, graduating as part of the Hartford Class of 1964.  Tony was a very proud Army veteran, serving his country during the Vietnam War.

He was employed as a semi-truck driver, a welder at Stolper Industries in Menomonee Falls, he worked at Threshold Industries in West Bend, and after 21 years of employment with Maysteel Industries in Allenton, retired as an AutoCAD specialist.  During retirement, Tony worked as a groundskeeper at the Washington County Golf Course and designed for Power Parts International in West Bend.

Tony loved golfing, fishing, playing cards, dancing, helping others, and spending his time inventing and creating projects and woodworkings.   He was a 50+ year member of the Allenton Fohl-Martin American Legion Post 483, marching in parades and serving as honor guard at local Memorial Day services.

Tony was most proud of his children and grandchildren. He was also very proud to be honored as a veteran on the Stars and Stripes Honor Flight to Washington DC in October of 2017.
He is survived by his children, Beth (Christopher) Meece of Fox Point, Sarah (Dave) Olds of West Bend, Mark (Tania) Wolf of Mayville and Katy Mihalko of Watertown; his grandchildren, Taylor, Isaac, Quinn, William, Graeson, Hannah, Gillian, Tiegen, Oliver and Adalynn; his step-grandson Logan (Amanda) Olds and great-granddaughter Scarlett; his sisters, Susan Kedinger, Linda Theisen, Ruth Ann (Leo) Wiedmeyer and Joan (Jim) Beck; many nieces and nephews, other relatives and friends.

He was preceded in death by his parents, Norbert and Dorothy, his brother Gerald and brother-in-laws Jerry Kedinger and Jim Theisen.

A Memorial Service will be held on Saturday, September 21 at 3 p.m. at the Myrhum-Patten Funeral Home, 1315 W. Washington St., West Bend.  Inurnment will be in SS. Peter and Paul Cemetery, Nenno.

Visitaiton will be at the Myrhum-Patten Funeral Home, West Bend, from 1 p.m. until time of service on Saturday, September 21.

In lieu of flowers, memorials may be directed to Stars and Stripes Honor Flight.

Twohig Funeral Home is serving the family. The family especially thanks Heartland Hospice as well as the nurses and aides from Crossroads Care Centers for their compassionate care during their dad’s time of need.