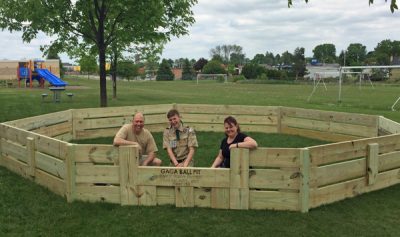 May 28, 2017 – Wets Bend, WI – Saturday morning, Cabrini alum Tyler Galante (8th grade class of 2015) came another step closer to becoming an Eagle Scout. He installed a GaGa Ball pit that he built for the school playground, to complete his Eagle Scout project.

A sophomore at West Bend East, Tyler has been in scouting since 1st grade. Eagle Scout is the highest rank in Boy Scouting, and only 4% of scouts are granted it. Tyler is the youngest in a family of three boys. His two older brothers were Eagle Scouts, and he always wanted to follow in their path. With this big project behind him, he now has a little bit of behind-the-scenes work to complete, and a few more merit badges, and he’ll have reached his goal.

GaGa Ball has been described as a kinder, gentler version of kickball. It is played in a low-walled, octagon-shaped, wooden “pit.” There’s no limit to the number of players, who dodge the ball while trying to get their opponents out by hitting them with the ball below the knees.

Cabrini 8th graders have been introduced to the game over the years while on the 8th grade retreat at YMCA Camp Minikani, where GaGa Ball is popular.

Gym teacher Mr. Buettner realized it would be a good addition to the school playground and the Phy Ed curriculum.

When Tyler talked with him about his plans for an Eagle Scout project, Mr. B suggested the pit. Tyler had been mulling projects involving elderly people or little kids, but when he heard this suggestion, he loved it, and decided to pursue it.

The project involved a number of preliminary steps. Tyler drew up a proposal and submitted it for approval to his troop leaders, and then to leaders in the Boy Scouts organization. He met with principal Mr. Hilts to discuss the proposal, and get approvals from the school, including from the school’s insurance company. He met with Mr. Buettner to discuss logistics of placement and timing.

Once he had the go ahead, Tyler secured funding for the project, and drew up plans for it. He did online research and visited local GaGa Ball pits to determine dimensions and learn how they’re constructed. He purchased the lumber, and cut it to form the 8 sides, each of which has three panels. One of the trickier steps was to cut the corners, so the walls would form a perfect octagon. Then he assembled the entire thing in his backyard, to make sure it would actually work. He took pictures of the finished pit to Mr. Hilts, to help with the final decision about where it would go.

On Saturday, Tyler brought along a crew that included his parents, Kurt and Michelle Galante, and three of his fellow Boy Scouts. They installed it, and did some finish sanding, completing it in time for this year’s Field Day. The students are thrilled.

Thank you Tyler! And congratulations on a job well done.