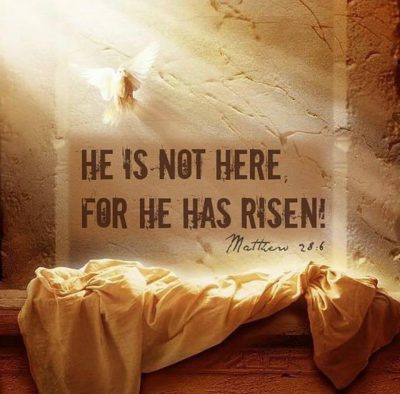 Today the Church around the world celebrates with profound joy the mysterious truth of the Resurrection of Christ from the dead. This is
among the most central of the facets of our faith, and it is also one of the most easily misunderstood in our modern
world.

The death of the Lord seems a bit easier to grasp on some levels. We experience death all the time and it is somewhat simple to conceptualize that Jesus died.

On our recent pilgrimage to the Holy Land, we stopped to pray at the exact place where He died, placing our hands on the rock of Calvary on which the cross once stood. In this way his death takes on an even sharper, more historical, and undeniably concrete reality.

Less than 300 feet away from the rock of Calvary is the site of the empty tomb. Once again, a pilgrim may stand in that spot, and place his hand on the slab of stone on which by tradition the Lord was laid during His burial on the late afternoon of Good Friday.

Thus the empty tomb, as a historical and concrete fact, is also somewhat easily established. Indeed, all four Gospels are relatively
consistent in their description of discovering the empty tomb early in the morning on the Sunday following Jesus’ death. There was
no disputing, and to this day there is still no disputing, that His body was gone from the burial place. This, too, is relatively easy to
grasp.

However, the fact of the Resurrection itself is something quite different. Few of us have ever really encountered any resurrected persons making our frame of reference limited. What happened to Jesus in the Resurrection is NOT the same as near death experience, with a clinically dead person coming back to life. It is NOT the same thing that happened to the dead man Lazarus, who Jesus brought back to life.

Those are examples of our ordinary, mortal, earthly life being brought back, and it is done so only temporarily. One day mortal death does take back over in all those cases.

Christ’s Resurrection was transformative on the most fundamental of levels and it moved Him, so to speak, into an entirely new realm,
or dimension, of existence and appearance for which we have no easy categories. The Resurrection is strictly speaking not even a
historical event since history by definition belongs to this realm of time and space that is shaped by mortality and limits. Our Lord has
crossed over into a realm that is outside of time. It is a reality that is BEYOND history.

This might explain why the appearances of the Risen Lord in the Gospels are all so mysterious in their descriptions. The Apostles
really did not know how to explain them exactly. What is absolutely clear, though, is their consistent conviction that they were encountering the Lord Himself and that His presence with them was enduring in a real way. The Resurrection, even if
somewhat beyond description, was (and is) clearly real.

In the Church of the Holy Sepulcher, built over the joint locations of Calvary and of the Tomb, I find the most instructive “spot” to be
the one just to the side of the tomb where there is an altar to Mary Magdalene. That is the location at which our group offered Mass
when we visited, and it is a place that commemorates the garden encounter on Easter Sunday morning, conveyed in John’s Gospel,
in which Jesus and Mary Magdalene speak. At first she does not recognize the Lord. Once she does, we hear the Lord telling her not
to cling to Him. What He means by this is that she and His followers must not hold on anymore to the old ways of thinking
about Him. A new vision and understanding is now required after the Resurrection, and the former ways of relating to Him are now
less than adequate.

The same is true for all of us who are His followers. Easter is about a whole new and expansive reality, so much so that our old ways of
thinking (mere history, mere science, mere matter, mere senses and sentiments) are only partially helpful. The deepest longings and
questions of life that arise in our hearts are only answered by Easter. In this way we are set free. In this way we are saved.

A Blessed Easter to you!