Home  »  Uncategorized   »   Flags to be lowered to half staff today/Thursday

Wisconsin Governor Scott Walker has ordered flags to fly at half-staff, Thursday, July 14, in honor of Officer Michael Ventura of the Salem Department of Public Safety who died in the line of duty Friday, July 8, 2016

Officer Ventura was killed when his patrol car crashed on State Highway 50, approximately 1/2 mile from County Highway B.

He was traveling with this emergency equipment activated when his patrol car left the roadway and entered a ditch, causing him to be ejected from the vehicle. He was flown to Froedtert Hospital in Milwaukee where he succumbed to his injuries.

Officer Ventura had served with the Salem Department of Public Safety for two months and had previously served as a corrections officer for several years. 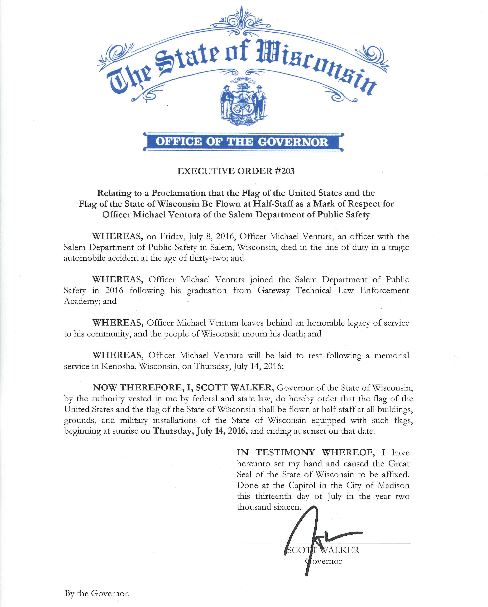