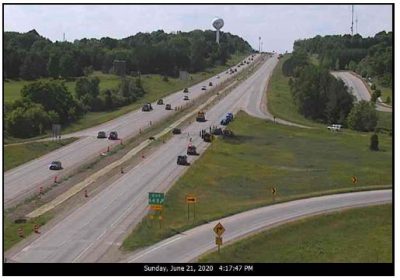 The first accident in the northbound lanes of I41 occurred around 3 p.m.

Another multiple-vehicle accident occurred in the secondary crash that happened when traffic backed up following the first accident.

“There were three vehicles involved in the crash on the interstate,” said Krisher. “Flight for Life was called and a male was transported. Another male and female in a vehicle were transported by ambulance and another female was going to seek medical attention but was not transported.”

Krisher said there were no children involved. He did not have the latest details on the people injured however he confirmed there were no fatalities.

Flight for Life landed at Held’s Meat Market just off I41. Officials said it was the safest area for the helicopter to land as it responded to the accident scene.

This is a working story and more details will be posted when information becomes available.

Previous articleEvolution Exposed is Saturday, June 27 at House of Prayer in Kewaskum
Next articleVIDEO | jobs, jobs, jobs at Schreiber Foods in West Bend