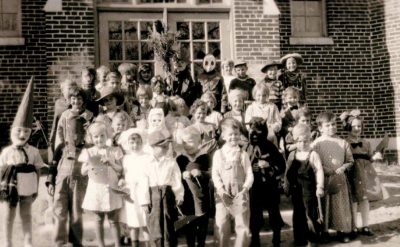 Oct. 29, 2018 – West Bend, WI – Costumes have changed but many Halloween traditions have stayed the same. Below are local memories from Halloweens past including embarrassingly-treasured homemade outfits and candy swapping on the kitchen floor.

Paula Anderson, Hubertus – “Since we had a very large family and it was the 70s and money was tight, we generally all had to share two hard plastic face masks. You know the ones, where a skinny elastic band was connected to the mask with mini-staples which would catch your hair and leave little bald patches on the side of your head.

The mask only had a slit for you to breathe and you could stick your tongue through, thereby slicing your tongue and having it hurt for a week. We would make the rest of the costume; we had lots and lots of hobos which included old flannel shirts rolled up at the sleeves, dirt smeared on our cheeks, and a stick with a bandana tied around.

Lastly, and I think this was just for laughs, the parents would take the youngest girl and put her in mom’s dresses and underwear and pack it full of pillows to look like a big fat old lady. We would find a wig (who knows where that came from) and some red lipstick to complete the outfit.

Back in those days money was tight so there was no driving around to houses, and there weren’t a lot of subdivisions, so we could only trick or treat on our road which consisted of about five houses.

Now, five houses isn’t going to give you nearly enough candy to last four days or even two days, so once we hit the five houses we would go home and the ones with the plastic masks would trade off and give them to the ones that didn’t have them, and then paint their faces and we would hit all the same houses!  As if the neighbors couldn’t figure out our scam.

The candy we would bring home and dump on the floor and sort it by suckers, hard candy, chocolate, and nasty chewy stuff.

There would be sub-categories like good suckers (anything cherry) and bad suckers, good hard candy and bad hard candy (candy cigarettes and bottle caps ROCKED!!), good chocolate (Reese’s Peanut Butter Cups were AWESOME AND STILL ARE), and bad chocolate, which was anything with coconut.

Once each person’s candy was sorted, the wheeling and dealing started. Almost always the older kids said, “I will trade you two of these for one of those.” Being a smaller kid, you thought you were really getting a deal if you got two for one so I would always say “sure”…and there went my only Reese’s Peanut Butter Cup for two icky salt water taffy blobs.”

Kathy Lofy of West Bend.  When she was growing up her family got plastic masks (a mousey gerbil thing and clown face) from Schultz Brothers in downtown West Bend. The masks were nothing but a hot mess. “You never wore those masks that long because your face would be dripping from the sweat just from breathing in it. All you had was a tiny slit in the lips and two little nostril holes, like that was supposed to help. And it was never quite the size of your face, it was an abnormal oval. Whose face was ever shaped like a big oval? Everybody ended up wearing the mask pushed up on top of their head because nobody could stand wearing it on their face.”

Shelly Kehoe of West Bend – “We’d spread all our candy around on the floor. We had so much I just felt like rolling in it, like we were filthy rich in candy. I loved it.”

JB Anon of West Bend – “I don’t think any of my friends had store-bought outfits.  That almost seemed too fake.  I remember a witch, which was a hat made out of black construction paper, black clothes, and the black nylon cape that my mom put around us when she cut our hair. A paper bag was always the candy catcher and candy bars were the favorite.  Circus peanuts were the worst.”

Jacci Gambucci of West Bend – “Halloween was in the dark. Our parents did not come along and had no way of knowing where we were. We had no cell phones, they just trusted we would land safely back on our own doorstep.  A pillowcase was the container of choice – large, strong, easy to carry.  We made a beeline to the “pillar house” on Spring Street because they gave full size boxes of Cracker Jack.  Worst treats were popcorn ball and candy corn. Costumes were definitely homemade, with the exception of perhaps a store-bought witches’ hat.”

Lori Lynn-Radloff of West Bend – “I remember going into Kliner’s Club, I lived down the street across the bar on Park Ave by Regner. When a group of kids walked in he would throw a handful of “full size” candy bars (those “big” candy bars were a big deal) on the floor and we would dive to get them. Sometimes people would give us pennies or apples. I do remember we never worried about what was in our bag. I don’t remember our parents checking our candy at the end of the night.”