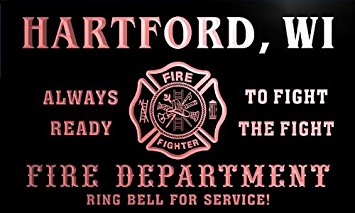 April 23, 2018 – Hartford, WI – Hartford Fire Chief Paul Stephans was having a storm spotter training at the Jack Russell Memorial Library when the call went out to Fire and Rescue of a car fire located downtown on Jackson Street.

The vehicle owner was attempting to get out of a snow-packed parking stall by revving the engine beyond normal levels which caused the engine to start on fire.

Chief Stephans borrowed an extinguisher from a neighboring business and controlled the fire long enough to allow the owner to retrieve all valuables prior to the entire vehicle being engulfed.

Hartford Fire was on scene in minutes to put out the fire protecting other vehicles and property from any damage.

The thick smoke of the fire covered much of downtown on Monday.

It is advised that anyone experiencing difficulty getting out of snowed in areas to use shovels to remove the snow prior to attempting to drive through it.

Again, by not parking on city streets during snow emergencies, it helps keep parking stalls clear for easier entrance and departure.