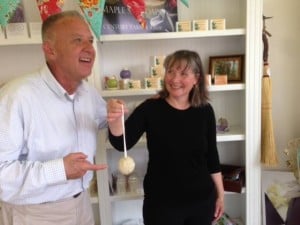 Around the Corner with John McGivern – the West Bend episode will air Feb. 11 on PBS.

There will be a preview party at the Museum of Wisconsin Art on Feb. 9. “We’ll have two showings including one at 4:30 p.m. and another at 6:30 p.m.,” said MOWA executive director Laurie Winters.

The show is free and open to the public. This past week, Around the Corner featured a tour of our neighbor to the north, Fond du Lac.

Check out the intro to the show and tell me if you recognize anything familiar. 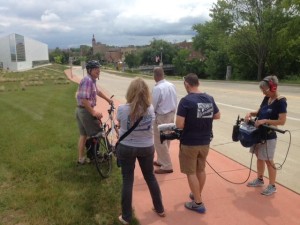 Washington County Insider was on scene during much of the taping of Around the Corner when McGivern and his crew were in West Bend.

Here’s a quick peek at one of the takes – note the background and ALREADY how many things have changed.

On an insider note:  While shooting the show open on Veterans Avenue next to the Eisenbahn Trail, a boy on his bike accidentally cracked his crotch on his crossbar and crumpled to the ground. Shooting came to a stop. Everybody turned. John Gurda asked the boy if he was OK. He said he was. Just a quirky memorable moment they McGivern crew will all take home about their time in West Bend.