Ozaukee Christian School will open in the Town of Trenton, 1214 Highway 33 across from West Bend Lakes Golf Course. 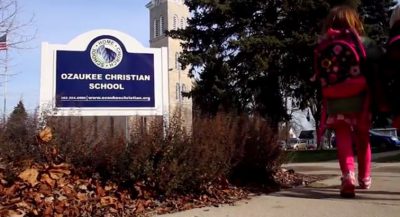 Ozaukee Christian School describes itself as “offering outstanding, Christ-centered, non-denominational educational opportunities for students from K3 to eighth grade. We are dedicated to academic excellence with a uniquely Christian perspective—one that places Jesus at the center of everything we do and acknowledges the Bible as our ultimate authority.”

The school is opening in the former Spearmint Rhino Gentlemen’s Club.

“The unusual building conversion is an answer to prayer that ends a years-long search for a building to call our own,” said Dave Swartz, OCS Board President. “God has given the leadership of OCS a big vision for growth while providing us what we need for each step of this project.”

OCS is a non-denominational Christian school founded in 1990. It has had several homes over the years. It started at Portview Christian Center in Port Washington, then moved to Friedens Church in Port, back to Portview and then to St. John XXIII in Saukville for the last 19 years.

But we have felt God leading us to a building of our own that will allow us to grow, to expand our ability to work with special needs children and to reach families of Washington County.

The property will allow us to do all this and more. We are purchasing a strip mall that includes the former Spearmint Rhino Gentlemen’s Club that we will renovate into classrooms, offices, a cafeteria and a multi-purpose room. Future additions include a gym with stage and locker rooms, and a new classroom wing.

We reached an agreement last week, March 18, 2019  to purchase the property from California-based Spearmint Rhino.

We are trusting God to provide the funds for this project, just as He cleared the way for us to buy this building. We have raised $425,000 so far and are seeking a total of 2.2 million to complete the purchase and initial renovation of the property. At this point we have hired a general contractor, and we also have many volunteers planning to assist in the building project. Anyone interested in helping with this work is encouraged to contact us!

“We have felt God leading us to a building of our own that will allow us to grow, to expand our ability to work with special needs children and to reach more families in Washington County, all the while maintaining strong ties with our families in Ozaukee County,” said Kris Austin, OCS Administrator.

How it came to be

Several school leaders became independently aware the property in January 2017, and after visiting the site and felt it could be a great fit. OCS reached out to Spearmint Rhino but were initially told they weren’t interested in selling. In July 2017, however, the company reached out and offered to sell the building.

The price was beyond what OCS was prepared to pay, but nevertheless the board began meeting with architects and contractors about potential designs. “We also launched a fundraising drive in April 2018 so we would be ready when God opened the door for us. In the meantime, we have done prayer walks at the property with staff, parents and alumni. Students regularly gathered to pray for the process. And we had a group of 140 “email prayer warriors” doing the same,” said Austin.

“After months of phone conversations, emails and the abundant prayers of God’s people, we were blessed with a signed purchase offer at a price we could handle. We have enjoyed getting to know Mr. Peter Garrell (attorney for Spearmint) and Ms. Joann Castillo (senior executive assistant) over these many months — and praying with them as well. It is a journey unlike anything we could have imagined. It is a story only God could write.”

How You Can Help

Anyone desiring to help with the funding of the building project or donating time/talent/materials to the renovation can contact the school through its website, click HERE or by calling the school office at 262.284.6980.

Ozaukee Christian School started because a group of parents wanted to make a difference in the lives of their children. They wanted an educational opportunity that offered sound academic, as well as Biblical, instruction. They also understood the importance of the bond between the home, the church, and the school, and wanted an educational environment that embraced this. The momentum behind Ozaukee Christian School began in the late 1980s, after much prayer and hard work, by this group of parents. The doors of the school opened for the first time in August of 1990, with thirteen students in grades K-4.

Today, the school has grown to over 80 students in grades K3-8. We are located in Saukville, the heart of Ozaukee County. OCS students are carrying the experience and education they receive at OCS to high schools and colleges around the country, where they continue to excel academically and serve the Lord in their homes, schools, and churches.