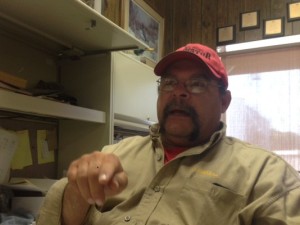 Can’t you all just see Karen Gonring shaking her head at what her husband is up to now….

“True story,” according to Doug Gonring from the West Bend Elevator as he talks about the sheepshead game where he was dealt four queens and picked up a pair of jacks in the blind. “I normally get rocks,” he said.

I pulled up a chair. Gonring was going to share every detail.

You know what I’m talking about.

It’s one of the great things about an old ballplayer – they’re REALLY GOOD storytellers.

He started out ….. and then got a little diverted.

“When I was a growing up…. we played sheephead every Monday night upstairs of the Woolen Mills,” he said.  “We strung a fishing line and a hook out the back window and it hit the river and middle of the game we’d pull in a big carp,” he said…. holding his arms out to display length of the Godzilla fish.

Back to present day and the no tricker – all trump.

Gonring snapped the winning hand on the table. “I said, ‘no tricker- all trump’ and it hit me.”

He said he stewed about it for a week and then had his buddy print shirts with the saying.

“You think anybody outside of Wisconsin will know what this means,” Gonring asked.

Gonring said he’s not holding his breath on whether his idea goes viral.

“I only ordered a dozen shirts,” he said.

Now…. maybe if he put the saying on a hat – – that may catch the Donald’s attention.