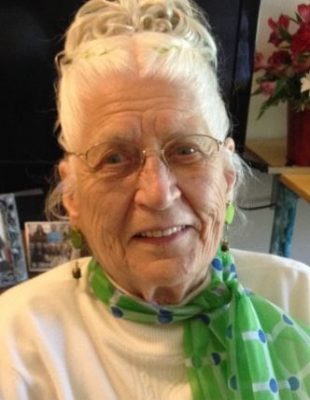 Elizabeth was born on September 20, 1924, in West Bend, the daughter of the late Nicholas and Elizabeth (Laatch) Laubach. On September 23, 1944, she was united in marriage to Harold “Muggs” Manthei at St. Michaels Catholic Church in St. Michaels. Muggs preceded Elizabeth in death on April 24, 2010.

Elizabeth loved the farm, her birds, and everything about nature. While she was at Beechwood Home Away From Home, she enjoyed the unexpected visits from her neighbors, friends, and most importantly her family that would come and see her.

In addition to her parents and husband, Elizabeth was preceded in death by two grandsons, Michael Fellenz and Michael Fierke, Jr.; a son-in-law, Michael Fierke, Sr.; a sister, Bernadine Van Altena and a brother, Alex Laubach.

A Mass of Christian Burial for Elizabeth will be held at 1 p.m. on Thursday, August 3, 2017, at Holy Trinity Catholic Church, 331 Main Street, in Kewaskum. Father Richard Cerpich will officiate and burial will follow in the parish cemetery.

Elizabeth’s family will greet relatives and friends at the church on Thursday from 11 a.m. until the time of Mass.

Elizabeth’s family would like to thank the staff at Beechwood Home Away From Home in Beechwood and Serenity Hospice for the wonderful care they provided.  The Myrhum Patten Miller & Kietzer Funeral Homes have been entrusted with Elizabeth’s arrangements.