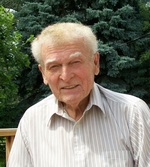 He graduated from Marquette University High School 1959. He married Donna Stofflet in 1963. The Krauss’ moved to Germantown where Ron worked in and later owned the family grocery business, Krauss Food Ranch.

He retired in 2011. Ron was civic minded and very involved in local government and various civic groups. He was a life long Brewers fan and history buff.

Ron is survived by his wife, Donna, son Kevin (Melissa), grandchildren, Keely, Kierstyn and Kevin Earl, and his sister Margaret Pelkhofer. He was preceded in death by his sister, Arlene, brother Harold, and granddaughter, Alyse. Also survived by other relatives and friends.

All are welcome to attend and celebrate Ron’s life. In lieu of flowers, memorials to The Alyse Krauss Foundation would be appreciated.