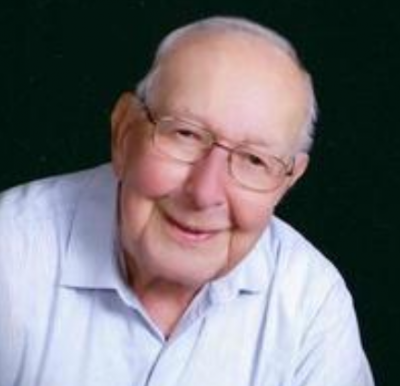 Joe and Marlene owned and operated Joe’s Red Owl in Allenton from 1955 to 1985. After his retirement from the store, Joe had more time for family activities at their home on Big Cedar Lake. He enjoyed creating many woodworking projects for his family, like the multi-purpose step stool for each of his children.

Joe, a World War II Army veteran, continued to serve his fellow veterans as Captain of the American Legion Fohl-Martin Post 483 Honor Guard through graveside services and Memorial Day ceremonies for 70 years. Joe was very appreciative of the opportunity to join fellow veterans on an Honor Flight May 14, 2011.

Joe also served the community of Allenton as a volunteer firefighter for more than 50 years including time as Assistant Chief and Treasurer.

In 2015 Joe and Marlene moved to Cedar Ridge where they made new friends and enjoyed opportunities to play Sheepshead and attend the many social activities.

The family would like to thank the care team from Heartland Hospice and Dr. Moniba Nazeef at the VA hospital in Madison for the compassionate care and support they provided our father.

A Mass of Christian Burial will be held Wednesday, December 4 at 6:00 p.m. at St. Lawrence Catholic Church, 4886 Hwy 175, Hartford, WI , with Very Rev. Richard Stoffel presiding. Interment will be at St. Mathias Cemetery in Nabob. The family will greet relatives and friends at the church on Wednesday from 3:00 p.m. until 5:45 p.m.