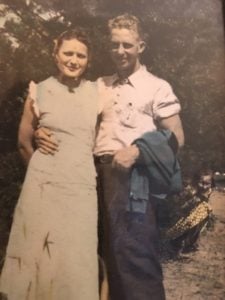 Feb. 14, 2019 – Washington Co., WI – On this Valentine’s Day we turn back the clock and remember a very special lady who touched a lot of hearts in this community.

Isabelle “Isy” Muckerheide of Kewaskum was 98 years old when she died in September 2016. Isabelle was a great storyteller and a good student of history and human nature.

Isabelle grew up in Neshkoro, WI and later in life she was a collector of “things”.

A lover of flea markets, rummage sales and Mike Paul’s Auctions, Isabelle would tell the story about being at the flea market in Cedarburg where she bought a clear baggie full of used greeting cards. She purchased it without really knowing the contents until she searched through the bag on her return home and found an unexpected treasure.

It was a Valentine with a note in pencil scribbled on back. Isy recalled the person the Valentine was addressed to and then noted it was signed “Isabelle”.

Yes… that Isabelle. The one from Neshkoro who was in Cedarburg nearly 50 years later picking up a clear bag of cards which contained a Valentine she gave to a friend while in grade school. 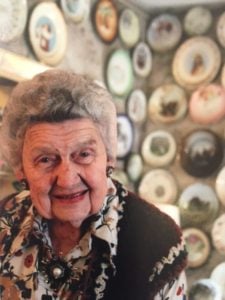 A couple more fun stories about Isabelle Muckerheide are below.

Muckerheide, 98, was part of the fabric of the community in Kewaskum. She’d been a staple with her card table and $1 loaves of homemade banana bread at the VFW Farmers’ Market.

In May 2015 Mike Paul from Paul Auction Co. in Kewaskum officially retired Isabelle’s bid card No. 1 after she sold her home and moved in with her “kid” sister, age 94.

How Isabelle became the official holder of card No. 1, is best told by Paul.

“One time, for reasons no one remembers, Isabelle and her husband were late to the sale and No. 1 was issued to somebody else. It was not well received,” he said. “A hasty discussion between mom and dad established that the Muckerheides would permanently be No. 1 – and they have been, for the last 46 years.”

Paul said “Al and Isy” were regulars back in 1969. “Isy had been a fixture for so long we always just assumed she’d be there,” he said. “If she couldn’t make it, she’d call ahead to let us know.” 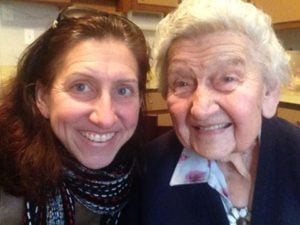 Every year Muckerheide could be found sitting in a wood rocker in the entryway of the old log cabin, knitting during Kewaskum’s Early Farm Days. Under her frock would be her trademark brooch, something she’d worn since she was 6 years old.

Born in 1918 when Woodrow Wilson was president, Muckerheide remained sharp, telling stories of seeing Liberace in concert in Appleton. “He played after dinner and had dancing water with colored lights,” she recalled.

She also cooked for Hollywood actor Spencer Tracy in 1941. “He was receiving an honorary degree from Ripon College and the dinner was held at a private home. My boss brought him back into the kitchen and Spencer Tracy shook my hand. I didn’t wash it for a week,” grinned Muckerheide.

A walking history book and sharp until the end, Muckerheide would share her experiences and insight on common things. She went to school in Neshkoro and reminisced, “I had a pencil and a tablet of paper for five cents. We practiced our cursive and we also had to memorize poems.”

Muckerheide enjoyed circle word books, watching Mass on TV, and contributing homemade goods for funerals. She was an avid bingo player and gambler. When she won she quietly shared her joy and when she lost she would say, “The Indians can go buy some new shoelaces.”

Muckerheide had been living in West Allis with her sister. She would often share, “We haven’t had to call the cops on each other yet.”

The story below was posted after Isabelle’s funeral.

A nice gathering of friends and family was held at Holy Trinity Church in Kewaskum on Tuesday to remember Isabelle Muckerheide, 98.

Isabelle was part of the fabric of Kewaskum. She died Monday, Sept. 19, 2016 – a day after checking in to hospice. 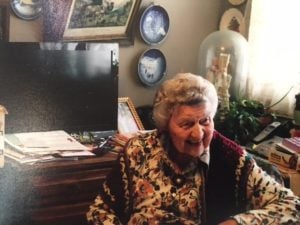 During visitation there were a lot of great memories and photos shared as family and friends came appropriately dressed in their favorite brooch – or they borrowed on from Isabelle; it was her subtle signature fashion statement and she owned it.

Prior to the start of Mass, members of the Muckerheide family shared stories of Isy; some did it with a poem in tribute to her gift of prose.

One relative spoke about helping Isabelle clean out her home prior to her move to West Allis about a year ago. “I found 27 potato peelers,” she said. “Help yourself when you leave church.” 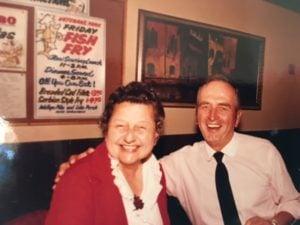 The woman also said they teased Isabelle about all the things she had collected/acquired. “Isy said each thing she saved had a story…. and then she came out of a room with a stack of letters from my father when he was in service in WWII. The letters were as thin as tissue paper. I guess she saved a lot of treasures, too.”

It was July the sixth of 1918 when Isabella was born

Her parents said her birth brought peace to a world that was war-torn.

A hard life kept her folks quite busy but still they bore two others.

Their parents taught them of God’s grace and the blessings it would reap.

She worked as a maid, a cook, and baker – the beginnings of a great homemaker.

Her world was broader for a while; her customers she would beguile 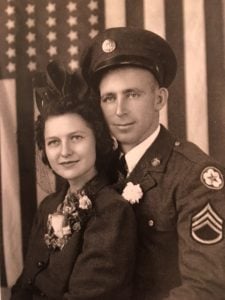 Spencer Tracy was the name that gave her a little claim to fame.

And though it wasn’t in her plan, back in Neshkoro she met a man.

His name was Al, he was in town to help with bridge construction

He found out who the new girl was and made his introduction.

They were together nearly 40 years; lots of laughter and a few tears 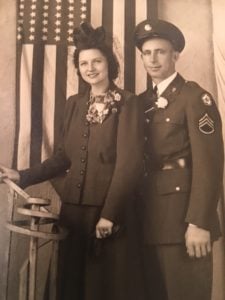 They made a home in Kewaskum, proud to say there they hailed from

On that plot on 28, each lived with their one true soul mate.

Auctions, gardens, cooking, baking, a smile with every undertaking

Together they became town fixtures; see what they did and all the pictures

Helped the museum, joined the Legion; made things better in this region.

But then her husband, her true love, was called home to their God above 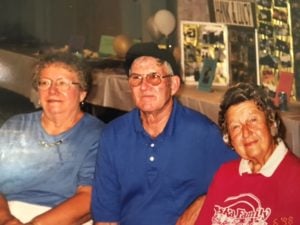 A great loss that was hard to bear, a love like theirs was truly rare.


She kept up her home when Al was gone; had many friends she could lean on

Watching out for her were neighbors; she was grateful for their labors.

But then Father Time knocked at her door; living alone was an option no more.

It was a difficult decision to make such a major life transition.

Her friends and neighbors she’d leave behind and they had to her been kind.

But to West Allis she did go and go, go, go she would

She was busy living there for life was still quite good.

Bingo, State Fair, and the word search, sheepshead, garden and to her church

Fish fries, parties, the hairdresser visit – at 98 she looked exquisite.

She continued until her body failed; her final breath at last exhaled

We asked God to take her in His care and He gave an answer to our prayer.

She was welcomed home by God’s own Son, he greeted her and said, “Well done.” 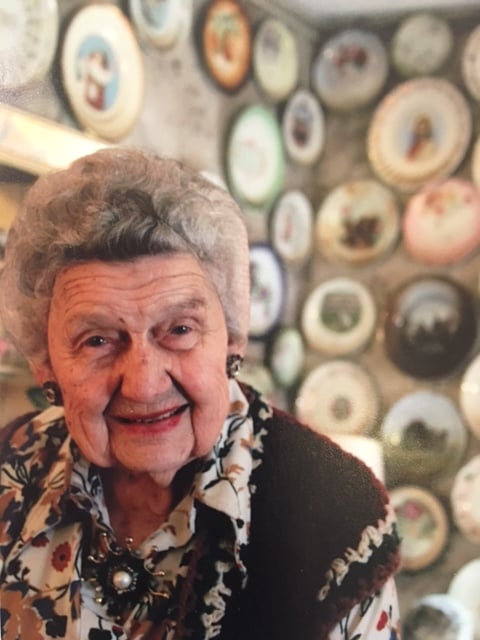 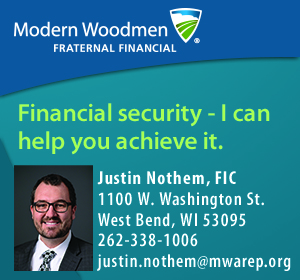 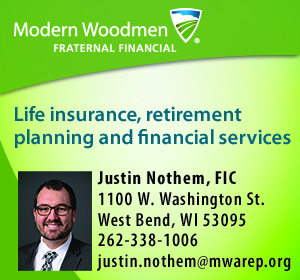 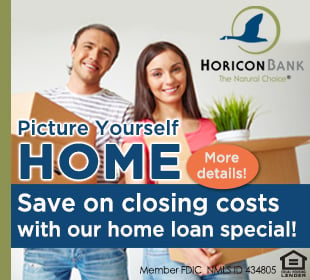