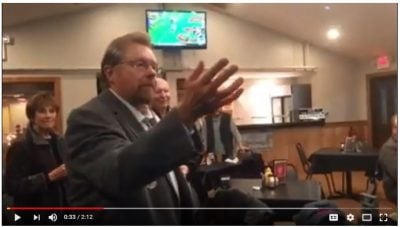 Jan. 16, 2018 – Washington Co., WI – Rick Gundrum has won the Special Election and will now fill the seat as the next Representative in the 58th Assembly District.

Gundrum, recently served as Washington County Board Chairman and a trustee in the Village of Slinger. He officially announced his candidacy Nov. 16 ;  he won a four-person primary in December and then began campaigning for Tuesday’s Special Election.

“This was tough because of the fact it was a Special Election and trying to convince people their vote was needed,” he said. “There was also a little bit of confusion because people thought I won already.” Gundrum had to explain that victory was in the primary which then advanced to the Special Election.

On a sunny morning after a fresh snowfall, Gundrum was voter No. 99 at the Village Hall in Slinger.

“Obviously in the way of personality it’s impossible to fill the shoes of Bob Gannon, however the person representing our assembly district has to be very conservative and willing to fight for conservative ideals in Madison and realize this is the reddest district in Wisconsin,” Geldreich said.

Gundrum said even though he’s going to have to do this again in 2019, he plans to hit the ground running.

“I’m going to try to jump in right away and I’ve had people already come to me with ideas and resolutions,” said Gundrum.

Gundrum is expected to be sworn in in the coming weeks in Madison.