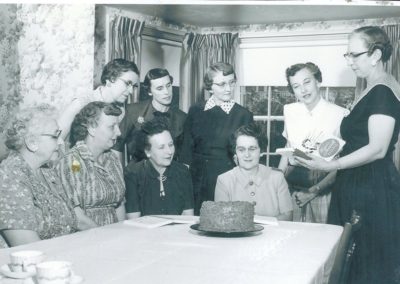 Dec. 14, 2016 – West Bend, WI – The final edition of the St. John’s cookbook ‘Our Favorite Recipes’ is available at several businesses in West Bend. Todd Tennies at Tennies Ace Hardware has a strong supply of the popular church cookbook, which began in 1949. The books are also for sale at Hankerson’s Bakery, 2107 W. Washington Street.

Below is a story about the history of the cookbook, published in Around the Bend on Nov. 2, 2013.

The well-known ladies of St. John’s Guild cookbook ‘Our Favorite Recipes’ is in its final printing.

“It was a lot of work and right now it seems nobody wants to take over,” said Carol Gerner, a member of the cookbook committee since the 1980s. “I will see it to its end but I can’t do any more than that.”

The St. John’s cookbook was established in 1949 by a committee of nine women. Under the direction of Esther Klein and Frieda Lange the group planned to collect the very best recipes into a cookbook, sell it at a low price with proceeds going to build a new kitchen at St. John’s Lutheran Church in West Bend.

A history book on Our Favorite Recipes, by committee member June Spielman details the “enthusiasm” behind “Esther’s amateur plan.” The ladies good-will effort to do the Lord’s work and share their valuable recipes to benefit the church soon met with the reality check of printing costs, editing, deadlines, and taste testing 300 recipes.

“A majority of recipes were all tried and true,” said Gerner, author of the recipe for cottage cheese rolls. “It was a good project and we got our kitchen.”

Over the years the cookbook took on a life of its own as hundreds of thousands of copies have been sold worldwide. Proceeds helped purchase a pipe organ for the church, finance scholarships and charitable institutions through the Lutheran Church Missouri Synod.

Testimonials include: “Not many community cookbooks are successful, but this one is an exception,” wrote the Farm Journal Food Editor from Philadelphia, PA and “A cookbook that refuses to die,” from the Sheboygan Press.

Closer to home, the news about the cookbook’s last printing is hitting some folks hard.

“Oh no,” said Lisa Achterberg-Schroeder a sales associate at Fireside Books. “The other week we just sold so many to a person buying them for a wedding shower.

Achterberg-Schroeder said she too received her St. John’s cookbook when she was 23 as a wedding shower gift from her mom. “That was in 1988 and she was cleaning out her cookbooks and she still had her copy of it and that was the actual paper spiral binding.

“It’s unbelieveable to have such a following. It doesn’t matter what denomination you are, you know about the St. John’s cookbook,” said Achterberg-Schroeder.

Fireside isn’t the only local retailer that carries the St. John’s cookbook – it’s also on sale at Hankerson’s Bakery and in the church office at St. John’s Lutheran.

Many dedicated cooks and bakers in the community have a personal tie with their St. John’s cookbook.

“I love this cook book for its unique hand-written style,” said Amy Leitheiser, “and because my Mom used it while I grew up, so I learned to bake using the recipes. The sour cream cookies are a traditional Christmas cut-out.”

Other reliable recipes in the Leitheiser household include the Mile High Strawberry torte, pumpkin bread, banana bread, and peanut butter cookies. “Granny Leitheiser was famous for using the Butter Horns recipe and we still make them from time to time so we can remember her.  But otherwise, nowadays, things like Butter Horns are a lost art.”

“The perfect recipe for any fruit kuchen comes from true Americana: the local church cookbook   Our Favorite Recipes,” said Craig.  “It’s been our favorite cookbook for generations. My grandmother had the 1949 edition, my mother has the 1959 edition, and my battered copy was published in 1976; our older daughters each have a copy of a more modern edition.”

Craig touts Esther Klein’s Fruit Kuchens recipes on page 35 of the 1976 edition. “By the way, if you ever find a copy of this book, all of Esther Klein’s recipes are winners,” said Craig.

Next week: Highlights from Spielman’s history book on the making of Our Favorite Recipes including the selection of artists Joan Pick, Al Ramsthal and Martin Baumann and anecdotes including cookbooks that arrived by ambulance.

Geralyn Unger This book has been a staple for many people, including my mother and the many cooks at Cedar Lake Home who got me started in my almost 40 year cooking career. It is a true piece of West Bend History.
Like · Reply · Message · November 15, 2015 at 1:33pm

Karen Haack Got mine from my mom for a shower gift 46 yrs ago,grew up with mom using hers so alot of my favorite reciepes are from the cook book. Cheese kuchen apple kuchen , german potatoe salad , poppy seed torte to mention a few. Found a book in a gift shop some wheres a few years ago and bought it .. Mine and my moms were falling apart. Love that book!!!!
Like · Reply · Message · November 15, 2015 at 6:00pm

Sandy Klatt- Lagerman I have one of those books handed down to me from my mother after she passed…love the book. Now my girls want one too.
Like · Reply · Message · November 15, 2015 at 7:43am

Ruth Wallinger What wonderful memories those recipes and their authors bring to mind when I use my well worn copy including the cake recipe from my mom Vivian Wegener.