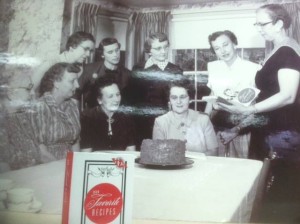 The latest shipment of St. John’s Guild cookbook, “Our Favorite Recipes” has arrived!

The first printing was in 1949 when a committee of nine women, led by Esther Klein and Frieda Lange, collected the best recipes in a cookbook that would be sold at a low price. Proceeds would go to build a new kitchen at St. John’s Lutheran Church in West Bend.

“A majority of recipes were all tried and true,” said Carol Gerner, a member of the cookbook committee since the 1980s and the author of the recipe for cottage cheese rolls. “It was a good project and we got our kitchen.”

Over the years the cookbook took on a life of its own as hundreds of thousands of copies have been sold worldwide.

“Not many community cookbooks are successful, but this one is an exception,” wrote the Farm Journal Food Editor of Philadelphia and “A cookbook that refuses to die,” from the Sheboygan Press.

The cookbook had a unique style with hand-written recipes supported by the antics of stick-figure cartoons.

Many households in the community had a copy of Our Favorite Recipes tucked in the drawer or standing on the kitchen shelf.

The same lovable cookbook produced in 1949 is back – it’s a little more modern with an upgraded binding.

Our Favorite Recipes sells for $15 and is available at Tennies Ace Hardware, St. John’s Lutheran Church, Hankerson’s Country Oven Bakery, and All in Books.