The history of Thecla Richter – life of a West Bend nurse during WWI. “All were presented with beautifully woven American flags….. “ 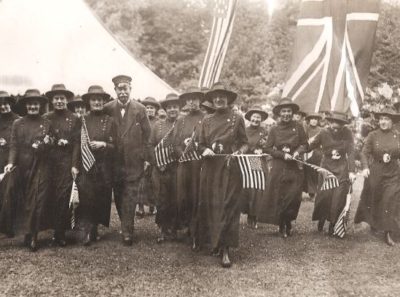 We are leaving London today and I hate to leave it because we have been having such a wonderful time. Everybody has been so cordial and entertained us in every possible way.  I cannot take time to write the details, but will just write about the wonderful farewell party at Sir Thomas Lipton’s home.

Four double decker trams called for us at the hotel on Sunday P.M.  Sir Lipton lives about 10 miles outside of London.  We were very much impressed with the place. It was all decorated with U.S. flags which we do not see very much in England.

We were all introduced to Sir Thomas Lipton and then taken into his lovely home. Here we were all given a beautiful corsage bouquet of red, white and blue flowers.  Then we were shown his many trophies which he had won.

We were then ushered to a large tent outside where refreshments were served and all were presented with beautifully woven American flags…..

We all left his place at about 6:30 P.M., each with a box of chocolates. Sir Lipton took five of us back to London in his own car.  I happened to be one of them.  I was real lucky.

Enough said about our good times as we certainly having them, but our work will begin soon and we are all anxious to get to work. 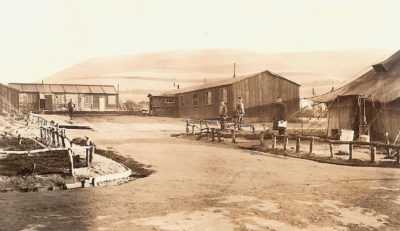 At last we are settled comfortably in France.  We are having ideal weather and the grounds are lovely…….  There are several other hospitals around us so there won’t be a chance that any of us will be lonesome. 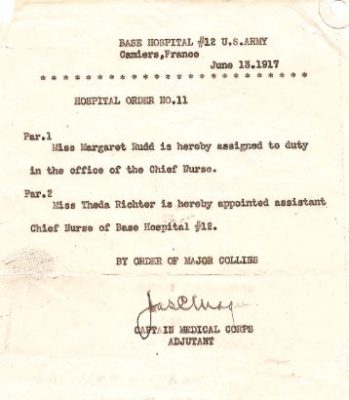 I am not in the operating room but am having work which takes me out of doors a great deal.  At present I am the Matron’s Assistant and have to make rounds in all the wards. Each ward is a tent or building separate from the rest so I get plenty of fresh air.  I know that I am going to be very keen about the work.

Don’t ever give any of my letters to the newspapers because it is not allowed to publish any letters from people on active service.