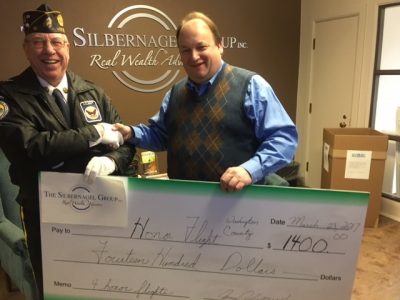 April 2, 2017 – Kewaskum, WI – The Silbernagel Group presented a check for $1,400 to Max Summerfeld of the VFW Washington County Post for the Stars & Stripes Honor Flight.

“Everything we do wouldn’t be possible without our veterans,” said Jim Silbernagel. “We made the donation to cover four people on the Honor Flight.”

“This means a lot to the people going on the flight,” said Summerfeld.