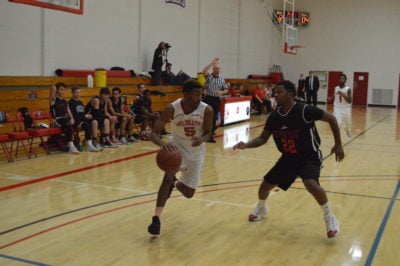 Feb. 6, 2017 – West Bend, WI – The UW-Washington County Wildcats mens basketball team found itself in a back and forth battle for the first 12 minutes of their game at the UW-Fox Valley Cyclones in Appleton as the lead changed hands seven times.
But when the score reached 20-19 in favor of the Cyclones, the Wildcats launched a 18-2 run to close the half with a commanding 37-22 lead.  Beginning the second half the Wildcats maintained momentum and bolted to a 66-39 lead before emptying the bench and closing with a 80-59 victory.

Evan Rathke led the charge with 19 points on 8-11 shooting and another monster rim bender elbows to the rim dunk in transition.  He added 8 rebounds and a game-high 6 assists and his defense was sensational as he forced several Cyclones to alter their shots to avoid being blocked by Random Lake High School’s all time leading shot blocker.

Shaun Fischer had 13 points and 8 rebounds and Dre Johnson scored 11 with 5 rebounds.

Javon Williams led in steals with 2 and hit 2-3 shots to go with 4 rebounds and a pair of assists.  Miles Perkins hit 4 of 5 for 8 points.

The game marks the 17th time the Wildcats have left a gym with a victory out of 23 games.  The regular season comes to a close Friday night when the Wildcats travel to Manitowoc to face 4-year school Silver Lake College in a 7 p.m. game played at UW-Manitowoc.