April 24, 2019 – Washington Co., WI – The Commissioner of Athletics for the Wisconsin Collegiate Conference George J. Hayes has written a statement of support for competitive athletics at UWM at Washington County and Waukesha County.

It was April 12, 2019 when interim dean Stephen Schmid issued a statement announcing conference athletic programs would be cut at the University in Washington County in 2020-2021.

A portion of his announcement is below.

The current competitive conference athletics program will remain the same for next year. Next fall, we will start planning for the shift to club sports and wellness programs in academic year 2020-2021.
The move to sunset competitive conference athletics at the end of the 2019-20 academic year is driven by several factors. Declining enrollments have resulted in declining segregated fee revenues, leaving less funding for non-athletics student life activities and personnel. For this academic year, athletics segregated fee budgets account for approximately 50 percent of all collected segregated fee revenues at Washington County and more than 30 percent at Waukesha. Second, with the end of the UW Colleges, the Wisconsin Collegiate Conference will be unfunded and effectively terminated next year. Continuing support for this conference will incur additional costs to both campuses. Finally, you may know that our coaches have often struggled in many sports to recruit enough students to form a team. On average over the past three years, Washington County has had 60 student athletes per year, and Waukesha 68, with some sports not running this past year due to lack of interest.
Recognizing decreased revenues from segregated fees, the student governance associations at both Washington County and Waukesha voted to cut funding for athletics in 2019-20 to help address a $110,000 shortfall in student segregated fees for the two campuses. Next year, we will work with the student governance associations to create a 2020-21 plan for club sports and wellness programs that we hope will result in a healthier student population.

Following the announcement the student council at UWM at Washington County held a meeting where students, faculty and alumni spoke out about the decision, the lack of transparency, and inaccuracy of some of the details in Schmid’s statement.  Schmid was in attendance at the meeting.

“I think this process has gone haywire. According to university policy if a decision is going to be made about SEG fees there should be consultation by the administration with the SEG fee committee to discuss the evidence. I know there’s a deficit of $120,000 in SEG fees between the two campuses. I know you’re going to have reduced enrollment…. the graphs show it. So adjustments have to be made. I know there was no discussion with the athletic directors, Debbie Butschlick (UWM at Washington County) and Adam Ligocki (UW-Waukesha), about what are your ideas. How can you reduce your operating costs to make a viable program and continue with athletics on your campus. That did not happen. The decision was made by Courtney, Steve and Dan – this is our recommendation we are going to cut athletics.

“I don’t know what the steps were and this was not handled right and Steve you have to agree with that and you do too Courtney.

“I personally believe that a program can be devised on this campus and on the Waukesha campus a very modest program but athletics will remain. Right now, sunset it’s dead; no more after next year,” said Brigham.

Below is a letter from WCC disputing the fact made by Schmid that the conference “will be terminated next year.” 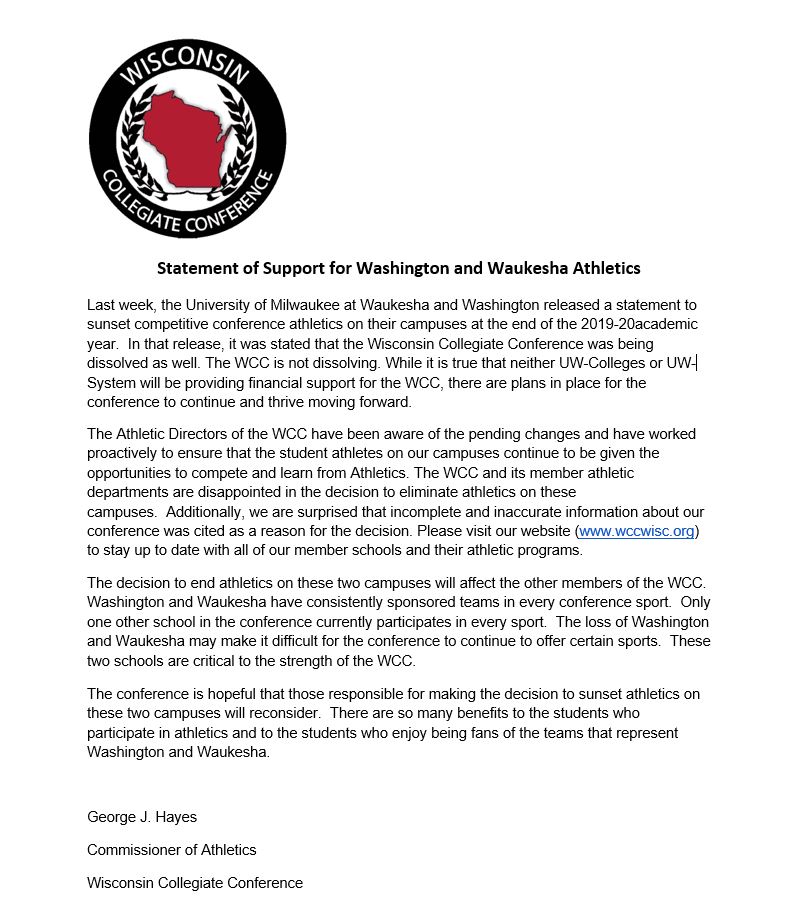