Nov. 14, 2017 – West Bend, WI -The 19th gathering of former employees of the old St. Joseph’s Hospital was held at the Top of the Ridge on Nov. 7. There were 109 people in attendance. Carol and Jack Daniels organized the event where people reunited, shared stories and camaraderie.

Janet Meisenheimer was a nurse at St. Joseph’s Hospital in West Bend in 1981 when the tornado hit the north side of the community. “The code was Dr. Blue or Dr. White and that meant to be prepared for bad storms in the area,” she said. “A little bit after midnight there was a baby delivered … but on the outside the storm was hitting badly.”

Staff made plans to evacuate and “we lined up all the cribs of the babies just in case we had to go to a lower floor.”

Janet Meisenheimer also remembered how vital the nuns were to the hospital. They lived on site in a small dormitory and they always were on call. Meisenheimer remembered Sr. Loretta and how critical she was when it came to delivering babies.

As photo albums and newspaper clippings were passed around there were lots of insight on how things used to be including the floor rugs in every room and the quilts on the bed. There were also quite a few stories about how patients had to be prepped in the morning for communion and how a white cloth had to be placed under their chin prior to the nuns serving communion. 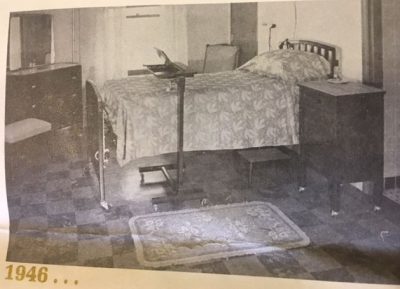 Tomorrow be sure to tune in as nurses remember the first time the medical helicopter landed at St. Joe’s.