Nov. 13, 2017 – West Bend, WI – Over 100 former employees of the old St. Joseph’s Hospital recently attended a reunion at the Top of the Ridge in West Bend. The event was organized by Jack and Carol Daniels.

There were many stories of the good ole’ days when St. Joe’s was located on the corner of Silverbrook and Oak Street in West Bend.

For the rest of the week we’ll bring you some of the stories from former nurses and doctors who recalled a community hospital where staff was family.

Richard ‘Doc’ Gibson was a doctor at St. Joe’s starting in 1955 – 1996. “When I first came here I had a small office on Main Street and then I moved into a nicer office space on the south side and there I practiced for quite a few years,” he said.

Doc remembers the old St. Joe’s as a “nice functioning hospital run by the nuns.”

“Everybody worked together,” he said.

Sharon Rennicke was a nurse at St. Joe’s in 1971. She started in pediatrics and advanced to the surgery department. “I remember pediatrics was the dungeon of the hospital,” she said. “When they were building onto the new hospital our hallway was located such that the bats would come in.”

On a history note – here are some details on how St. Joseph’s Community Hospital got its start. I believe the 1920 date on the photo below is incorrect. Details are courtesy Froedtert and the Medical College of Wisconsin. 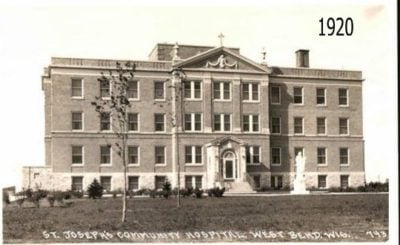 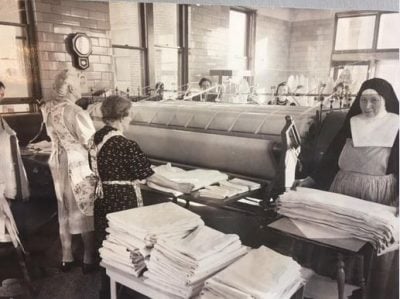 Coming up tomorrow – stories about Sr. Loretta and the accidental baby delivery in the elevator at St. Joe’s and how hospital staff reacted during the West Bend tornado April 4, 1981.