Dec. 7, 2018 – West Bend, WI – Today I completed 24 years, 341 days of not missing a day of running. On Thursday, I talked about the children and how they have not experienced a day of their lives without their father taking his daily run.

Today I would like to talk about my wife of 26 years, Kelly, and how she has been affected by the daily run.

The streak started after I attended an alumni wrestling tournament at the University of Wisconsin – Eau Claire sometime during the fall of 1993. At that time we would have been married about a year with no kids arriving until Jack was born on July 10, 1995. I remember numerous times waking up in a panic the first year of the streak thinking that I hadn’t run and it was 11:45 at night. While scrambling to put my running clothes on, I always woke up Kelly who would tell me to go back to bed. She would remember that I had already completed my daily run though I would still question her.

I would eventually realize I did in fact run and would fall back to sleep quickly leaving Kelly wide awake. She started asking that I keep a log of my runs so when I woke up in a panic I could simply look at the log and go back to sleep. As soon as I started documenting each run, I no longer woke up in a panic.

I also had to plan carefully around the times each of our four children were born. I remember the morning of July 10, 1995, it was extremely hot and humid. My wife said, “I think it’s time.” I asked her if I should go for my run now or if I should wait until after she has the baby. Thinking about it now I guess I am really lucky to be alive. The streak was only a year-and-a-half old at that time and not very important to a woman who was in labor with our first child. She told me to run now, but make it quick. Jack was born later that day and the streak was still alive. For each of the next three children I made sure I woke up very early in the morning when the due dates got closer. I was never going to ask her that question again when she was in labor. 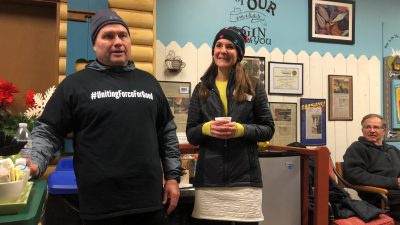 Today I ran from the doorsteps of Interfaith Caregivers of Washington County, located at old Pick ‘n Save north site. I was pleased to be joined on the run by Amy Boettge who recently joined the Board of Directors for Interfaith. She talked about the reasons for volunteering with Interfaith and it is clear to me that she feels that she benefits as much as the people she works with. Our United Way agencies benefit greatly from these selfless acts of kindness. Amy has raised three children of her own and now feels compelled to provide for our community.

Interfaith works with seniors to remove barriers to independence. An extensive volunteer network made up of caring and dedicated individuals like Amy deliver these services to our golden population. Today’s sponsor was Todd Dock and his Midwest Preferred insurance group. Todd was driven to sponsor the event because of all the wonderful services that Interfaith has provided to his father-in-law.

Saturday’s run is at 9 a.m. starting at the St. Joseph’s Hospital lobby. Please join us as we run the two-mile route in honor of Easterseals of Southeast Wisconsin.

Remember to mark your calendar for New Year’s Eve Day, Dec. 31, and the culmination of the 25 Runs of Gratitude.