Washington County has effectively utilized the $154,809,516.00 collected through 2016 to improve roads, construct buildings and pay off debt.

West Bend Mayor Kraig Sadownikow praised the collaborative efforts between Washington County and the City of West Bend and called for continued efforts to work together including this revenue sharing proposal.

“Municipalities in Washington County, like West Bend, take the financial risk by investing in infrastructure including water, sewer, roads and sidewalks to attract sales tax generating businesses to the area,” said Sadownikow.

If approved by Washington County, each local municipality would have the opportunity to enter into a revenue sharing agreement to fund road construction or pay off debt.

This resolution requested 25 percent of the amount collected annually in Washington County.

This amount would be shared by all participating towns, villages and cities in the county. The formula  equally allocates the $2.875 million to municipalities based upon population and equalized value.

Calls have been place to officials in Washington County. We’ll bring you their response when it becomes available. 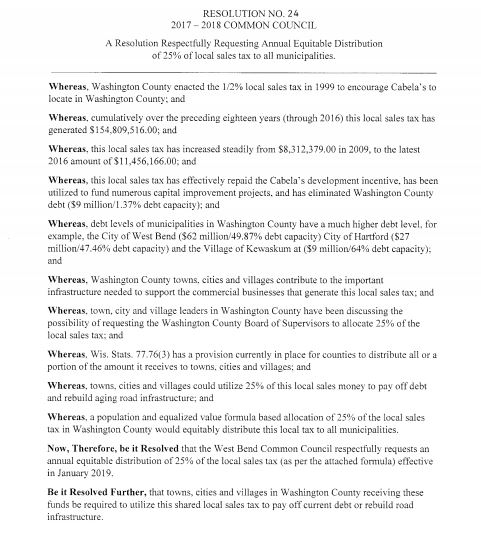