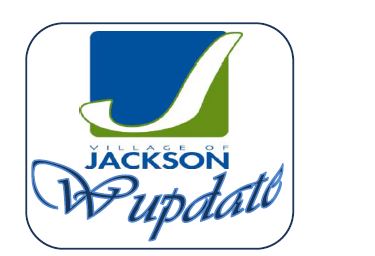 Police Department
It has been a fairly quiet week.
If an abandoned vehicle isn’t claimed by the lien holder by Friday afternoon, it will be considered forfeited and eligible for public sale.
The Sig Sauer firearms company delivered replacement pistols, due to a potential trigger safety issue. A qualification shoot has been scheduled in August, after which the original pistols will be returned at Sig Sauer’s expense.

Fire Department
There were twenty-five medical and nine fire calls this week, including two calls for gas leaks, five fire calls, and two motor vehicle accidents. The Jackson Fire Department assisted Kewaskum Fire Department for a barn fire, West Bend Fire Department for a house fire and an exhaust fire at Burger King, and a large industrial fire near Union Grove at John’s Disposal facility in Racine County. We also assisted Slinger for a high-speed crash on I-41 at CTH K. Another crash occurred on Division Road and Fond du Lac Avenue involving a semi and two vehicles. A wire down on a tree in the town of Jackson that caught fire was also attended to.

Monday training included an officers’ meeting. Discussion involved the method of replacing air packs that will be outdated next year; an item that will need to be budgeted for this next year. While a grant is being sought, large-ticket grants are difficult because most departments in the country apply for them.

Joint Parks and Recreation
Thank you to Gloria Teifke for pulling lots of weeds around the JACC, and sprucing things up.

Kelly attended the 4K Site Directors meeting on Tuesday. There are currently twenty-two kids enrolled in the morning and in the afternoon sessions (two over the maximum.) Six kids will be participating in the Speech Program during Tot Time this school year.

On Wednesday, Kelly had a meeting with Tammy Anderson, Director of the Washington County Aging and Disability Resource Center. We reviewed the first and second quarters and continue to work on the process of reimbursement.
Kelly has been elected to the Washington County Convention & Visitors Bureau Board of Directors. The first meeting was held Thursday morning. She had previously served on the board a number of years ago.

The WPRA Foundation Board of Directors met at the JACC Thursday morning, and is busy planning the 20th Annual WPRA Foundation Scholarship Golf Outing that will take place on Thursday, September 13.

Renee is thrilled that we are half way through our adult outdoor sports season and have had no rainouts so far. Keep your fingers crossed.

Kelly and Brian, and Ericka Stelz of Northland Recreation, will be meeting on Monday morning to begin the project planning process for the completion of the Hickory Lane Inclusive Playground. We will begin by marking/staking the layout of the equipment placement and site. Thanks to Brian for getting Digger’s Hotline all set.

Next Saturday, July 21, our Fitness Instructor Wendy Iverson will begin her new “Cardio Mix Upbeat” class. There is still time to register.

Reminder: The next Greater Jackson Business Alliance (GJBA) meeting is Wednesday, July 18th at the Community Center. Contact Phil Dahlberg if you’re interested in attending and/or joining the GJBA.

Building Inspection
The water main was tapped in Sherman Creek Estates for the second apartment building. A four-inch water service was installed as well as the sewer.

Public Works
The Jackson Water Utility completed this quarter’s meter reading with only one meter issue (consumption had to be estimated), and six radios with issues. The VFD at Well #3 failed and the pump shaft broke. It is uncertain if the two items were related. A well inspection was completed last year. The faulty items may be under warranty. The VFD (now obsolete) also failed at Well #4. We were fortunate to find the parts on eBay. The drive has been repaired and is back on line for a minimal cost. A new drive is about $15,000.00. There were 213 Digger’s Hotline locates for the month of June averaging eleven per day (maybe a new record.)

The Street & Parks Department continues mowing and ball field prep. Replacement street trees are being planted for the ones removed last year in the Highland Creek Farms subdivision. While the trees have been watered, a good rain would help. The line painting for crosswalks has been completed. Parking lots will be done later in the year. Weed spraying continues in parks and at Village owned buildings.

At the WWTP: Equipment and general maintenance continues. Sludge hauling is being done, with fifteen feet remaining in the blue tank. Lowering to ten feet will leave enough storage until the fall hauling period. The septic haulers are using the new key pad metering system. The crew is getting the lab ready for the new cabinets being constructed, by temporarily moving the lab to the lunch room. The sanitary lateral road repairs have been prepared for paving on Monday, July 16th.

The Jackson Water Utility has filled the water main in the Rosewood Lane project to test for a safe water sample; a pressure test will then be done. The service laterals will be installed next.

Washington County Health Department completed the annual inspection of the Hickory Park Splash Pad and approved the operation for another year. The Village-owned Park-n-Ride on Apple Lane is being closed and temporarily moved to the former County-owned Park-n-Ride lot at the intersection of State Hwy 60 and County Hwy P. The temporary move is to allow for a more efficient reconstruction of County Hwy P project.

Clerk/Treasurer
Absentee ballots were mailed for those voters who have a request on file for the August 14, 2018 Partisan Primary Election. A pre-test was performed on the equipment and ballots prior to mailing. A large number of Absentee Certificate Envelopes have been returned incomplete. Please make sure to read the instructions in full and if you have any questions, contact the Clerk’s office. The Type E Notice, Absentee Voting Instructions, has been posted and will be published in the paper on July 17. In-person Absentee Voting for the August 14th Partisan Primary Election will begin at Village Hall Monday, July 30th to Friday, August 3rd from 8:00 a.m. until 4:30 p.m., Monday, August 6th to Thursday, August 9th from 8:00 a.m. until 4:30 p.m., and on Friday, August 10th from 8:00 a.m. until 5:00 p.m.
The annual TID, Liquor Licensing, and Cigarette/Tobacco License reports were filed with the Wisconsin Department of Revenue.

Staff participated in an introduction and second series of the Badger Book August Implementation webinar. Equipment should be delivered the week of July 23 with staff training the week of the 30th.

The second installment of the 2017 real estate taxes is due on or before July 31, payable to the Washington County Treasurer, 432 East Washington Street, PO Box 1986, West Bend, WI 53095.

Administrator
The Wisconsin Department of Administration approved the Bielinski annexation ordinance just prior to the July regular Village Board meeting on Tuesday evening. The Board introduced the ordinance, suspended the rules, and adopted the ordinance that evening. The ordinance has been recorded with the County and it, along with two electoral ward change ordinances, has been sent to the appropriate state and county agencies, school and technical college districts, and utilities.

WCMA Region 6 held its meeting this week in Hartford – with the dunk tank for their Maxwell Street Days located just outside the meeting door. The presenter was Rick Bayer, Director of Loss Control for Cities and Villages Mutual Insurance Company (CVMIC). The main topic of discussion was the general hiring process, within the overarching scope of succession planning.

Congratulations to Village President Mike Schwab on his July 9 induction as the newest member of the Moraine Park Technical College District Board, serving a two-year term as the Elected Official member representative of the Board.

The Jackson Quarterly was completed this week and has been mailed along with the quarterly utility bills. It is also online; click HERE. Many thanks to volunteers Billie Vaughan, Gloria Teifke, Donna Beine, and Jan Malcolm and her husband Village Trustee Gary Malcolm for stuffing the approximately 3,000 envelopes for the mailing. Thanks also to Carla for finishing the project by licking all the envelopes.

Yesterday, a pre-trial/scheduling conference was held between the Court and counsel regarding the long-standing suit against the Village by the JTRAA and town of Jackson. Stipulation was reached to dismiss the case. The town’s attorney had already signed on, but the JTRAA and its attorney were evidently ill-prepared to sign on to the stipulation, but told the judge we should have his signature next week; at which time the stipulation and order can be filed and the case will be dismissed.