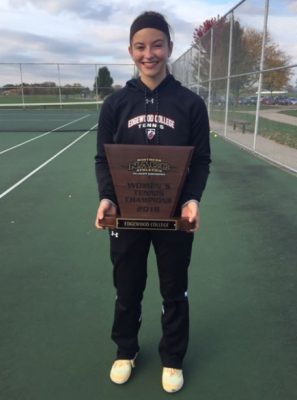 Oct. 15, 2018 – Slinger, WI – Abbie Groppe, a 2018 graduate of Hartford Union High School, is part of the Edgewood College Women’s Tennis Team which won the conference championship over the weekend.

HOW IT HAPPENED
– The Eagles started the day with a route of Concordia Chicago, winning easily by a 9-0 final. The No. 2 team of Marissa Wilson and Jaclyn Swift rolled to an 8-0 win while the No. 1 (Kai Heineman and Alicia Picard) and No. 3 (Abbie Groppe and Hayley Nau) each won by 8-1 scores.

– In singles play Edgewood College won all five of the matches it played by perfect 6-0, 6-0 scores. The final win at No. 6 singles was via default as the Cougars only had five players play in singles competition. The Eagles lineup from No. 1 through 5 was: Alyssa Carew, Heineman, Wilson, Haley Brooks, and Lydia Dean.

– The win over the Cougars gave Edgewood College a share of the NACC Title and another 9-0 win over Dominican helped the Eagles secure the title outright. Once again, Edgewood was dominant in doubles play, winning both matches by 8-0 scores. The third doubles match was won by default.

– Sydney Verbauwhede and Alyssa Carew posted an 8-0 win at No. 1 doubles and the duo of Brooks and Nau also cruised to an 8-0 win.

– The Eagles only played five singles matches again and won all five with relative ease, the sixth win coming by default. Wilson posted a 6-1, 6-0 win at No. 1 singles and Brooks swept a 6-0, 6-0 decision at No. 2 singles. Dean, Groppe, Nau rounded out the lineup with the trio dropping a total of two games. Groppe won 6-0, 6-0 in her No. 4 singles match.