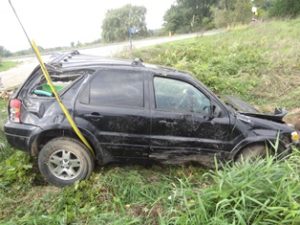 On Thursday afternoon, at approximately 2:46 pm, the Dodge County Sheriff’s Office responded to a single motor vehicle crash on Town Road MM West of Jefferson Road in the Township of Ashippun.

Preliminary investigation shows that Noelle E Deehr, 32, of Horicon, was westbound on Town Road MM in a 2005 Ford SUV. Deehr lost control of the vehicle causing the vehicle to enter the south ditch striking a steep embankment and a utility pole. A 3-year-old was ejected from the vehicle causing serious but non-life threatening injuries. The child was flown from the scene by Flight For Life to Children’s Hospital. Deehr was uninjured but alcohol appears to be a contributing factor in the crash.