March 10, 2019 – West Bend, WI – To say that Tom Meisenheimer has had a diverse background is to put it mildly. 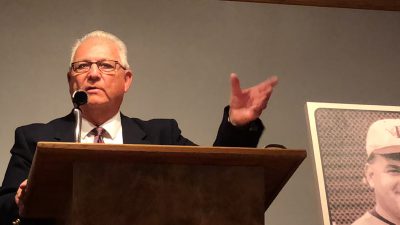 Tom has been a Catholic priest, a job procurement director, a co-owner of a “quiet sport” retail store, an executive director of several hospital Foundations, an owner operator of a game and Toy Company, among other opportunities.  Throughout those experiences, however, Tom’s involvement and love for the game of baseball never stopped. 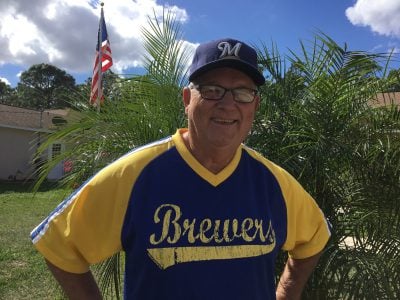 Tom played baseball starting when he was a kid in grade school.  When the Boston Braves moved to Milwaukee in 1953, Tom was overjoyed.  He was in 8th grade at the time and now says that he can still name the starting line-up of the first game played in Milwaukee against the St. Louis Cardinals in April of 1953.  He watched many games from “The Hill” at the VA Hospital which is south of what used to be the County Stadium location.  At that time the VA had set up a bleacher area on the hill which allowed patients and visitors to view the game (it was still a long way away from the field).

While Tom was in high school he and Jerry Repenshek (now Father Jerry) served as water boys for the Los Angeles Rams when they came to the St. Francis Seminary in Milwaukee to practice before their games with the Green Bay Packers in 1954 and 1955.  The Rams arrived in Wisconsin a week before their game because the seminary field was private and they could practice without any interruption. 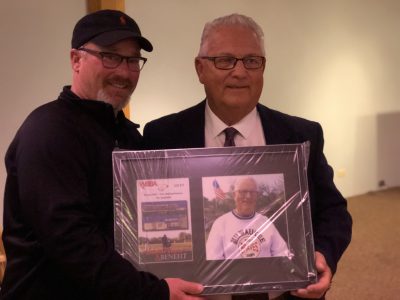 Tom also played pick-up baseball every day will growing up in Milwaukee with his brother Jerry and the neighborhood kids.  While he was in high school he pitched and played left field for the St. Francis Minor Seminary.  He also lettered in track and football.  He continued Softball in college at St. Francis Major Seminary.  He went from the minors to the majors (so to speak).

After years of study at the St. Francis Seminary, Tom was ordained a Catholic priest in 1966.  He served as a chaplain and parish priest for 4 years.  During his priesthood he wrote a book which was published in 1968 titled “Formed by the Word” and wrote a column for Hi-Time, a national youth magazine.   He continued to play softball in Brookfield during his priesthood days.  He left the priesthood in 1970.

Tom moved to West Bend in 1970 and became the first Program Director for the Kettle Moraine YMCA.  He immediately joined the Amity Softball team and played on the field North of Carl Kuss Field and from there he could see the high school games going on at Carl Kuss.  This began his involvement in baseball and softball in West Bend that lasted for over 40 years.  Although Tom did not play baseball during all that time, he contributed to the success of baseball in West Bend in many other ways.

While employed as the job procurement director for the Threshold from 1971 through 1973, Tom was responsible for obtaining work for the clients, such as packaging, assembly, etc., which involved contacting local businesses and getting to know people.  One of his other duties was to help raise funds for the Threshold which included the annual Lithia Benefit game which featured the West Bend Lithia baseball team playing Barton with all proceeds going to benefit the Threshold and was a large fund raiser. 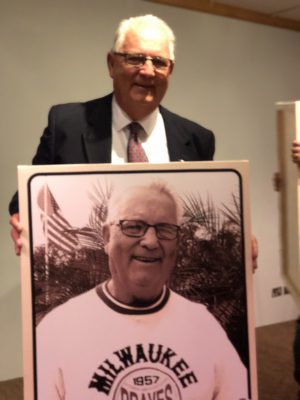 In 1974, Tom and Joe Hahn became co-owners and operators of the Sail and Trail sporting goods store which became one of the largest in the area.  Tom and Joe referred to their products as “for the quiet sports” because they sold cross country skis, bicycles, tennis and camping equipment, and canoes and smaller sail boats.  During this time they organized (along with the YMCA), a cross country ski race (Vasolopet), which ran through Ridge Run Park, with the proceeds benefiting the YMCA.  Tom continued in this business until 1981.

Tom was executive director of development for various hospital and university Foundations from 1981 thru 1987.  During those years he led many fund raising campaigns which in most cases met or exceeded the goal.  He created unique fund raising techniques which have been applied by other organizations in their fund raising events.  Tom was a member of the Rotary for over 30 years, and was President of the Menomonee Falls Rotary.

Tom, with the help of his wife Pat, (whom he married at St. Mary’s Church in 1977 with reception at the Columbian) started his own sales organization in 1987 which sold games and toys to major US retailers.  Tom organized a national sales team and coordinated the efforts of several representative companies.  Tom designed and developed many of the games that they sold, which were then produced by game manufacturers.  He created the game “What’s Up Doc” for the celebration of Bugs Bunny’s 50th birthday in 1990.  He was also the National Sales Manager for the Super Grip Ball Game which sold Millions of units and featured Bob Uecker as the TV commercial personality for that product.  Tom continued in that business until 1993.

From 1993 until 2000 Tom served as National Sales manager for Special Markets for Carlisle Corp.’s Brookpark  Plastics based at the Kenro plant in Fredonia, Wisconsin.  They made specialty products for McDonalds, Anheuser-Busch, and many others.  One of the orders he secured was a million commemorative plates for a McDonald’s promotion of the Hercules movie.  From 2000 to 2004 Tom was the Director of Fund Development for the Ranch in Menomonee Falls where he initiated fund drive methods that doubled the annual giving revenue.  He then served as a marketing consultant for the Threshold from 2004 to 2013.

Tom’s baseball involvement began in earnest in 1992.  He became involved with the West Bend Little League and in 1994 served on the Campaign Executive Committee (led by Bob Jahn) to fund and build two new diamonds at the Little League complex on Water Street.   The fund drive exceeded its goal and Tom worked to initiate the Brick Patio area to honor those who contributed to the fund drive.  He served on the Little League Board  (including Vice President) from 1994 thru 2000.  From 1992 thru 1994 Tom (along with Tom Dahlen and Sean McMahon) coached the Dick’s Pizzeria team in the Little League.  He then moved to the Senior League (players 13 to 15) and managed the Teachers team along with Tim Essinger.  He also served as an assistant coach for an American Legion Team which was managed by Wade Petrin.  Tom was one of a number of parents who were instrumental in helping form and develop the Warrior youth traveling team which played games throughout the state and Illinois.   His son Matt played on all of those teams. 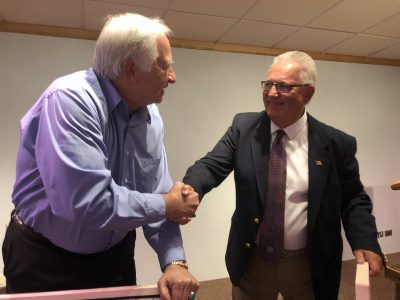 Tom joined the West Bend Baseball Association in 2005, where he served as secretary for many years.   Among the activities he started was the fund raiser auction for the Wall of Fame banquet.  He also arranged for a 3 week visit of the miniature White House at the Fair Park which drew over 10,000 visitors and raised funds which were split among several charities including the West Bend Baseball Association.  It included a display of all past United States Presidents throwing out the baseball to kick off the major league seasons.

His involvement with West Bend West High School Baseball began in 2005 when Matt became a member of the Varsity team.  He organized 50/50 raffles at the West baseball games which benefited the West program.  He spent many winter evenings during 2005 through 2008  hitting ground ball in the Sky Garden at the High School to members of the Freshman, JV and Varsity teams, decorated Kuss Field for the sectional and regional games, raised money for the bus to the State Championship games in Stevens Point in 2005, 2007 and 2008.  He served as the color man with play by play announcer Azor Cigelski on WBKV radio broadcasts of West Bend West, West Bend East and Kewaskum baseball games from 2010 through 2012, as well as 2 championship games.

Tom is proud of his family.  His wife Pat was an elementary school teacher at Fair Park School for over 35 years.  She is an avid outdoors woman who enjoys biking, tennis and other sports.  Their oldest son Mike is a graduate of the University of Florida and is a consultant for Gamler Lures in Florida and is also a professional tournament bass fisherman for which he has won many awards and appeared on NBC Sports.  (Web site is mikeybalzzfishing.)  Their youngest son Matt played on the West Bend West Baseball Varsity team for 4 years (2005 thru 2008) where he earned all Conference honors each year.  He was chosen All-District Scholar/Athlete in baseball.  He played college baseball at UW-Whitewater and then graduated from UW-Madison, is married to Katie, and lives in Janesville.  He is an accomplished photographer who leads workshops throughout the country and plans to hike Mt. Everest this year.  (Web site is meisphotography.com).

Tom and Pat moved to Lake Placid, Florida in 2013.  Tom is now retired and writes feature stories for the local paper and serves as a docent for the local museum.  They spend their summers on the Chain of Lakes in Minocqua and winters in Lake Placid. Tom continues to follow the baseball scene in West Bend.  He said that although he did not have a personal history as a ball player in West Bend, he worked to help many young West Bend ball players develop their skills via coaching, helping coaches and raising money to support their programs.  Pat taught at the same school for 35 years, but Tom wanted to experience as much in life as he could and found careers in many interesting and exciting fields.  Just like baseball, he won a few and lost a few but still loved the challenges of new things.

The baseball scene in West Bend is in good shape thanks to people like Tom Meisenheimer.  He is very deserving of being named to the West Bend Baseball Association Wall of Fame.