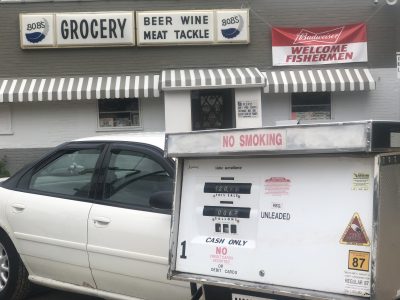 July 6, 2018 – Newberry, MI – Mother Nature is sure showing me whose boss …. and I’ll let you in on a secret, it ain’t me.
Pedaled 62 miles from Manistique to Newberry; ‘The Moose Capital of Michigan.’
Bob’s Stop & Shop
There was a precious little grocery on Hwy 2 just a bit east of Gould City.
Bob Allie ran Bob’s Stop & Shop. He was a wiry old man who wore a striped shirt and bluejeans and he was extremely officious.
While I was never in Otten’s Grocery in Barton, this is what I imagine it would have been like.
Click HERE to tour inside Bob’s Stop & Shop.
Hardwood floors painted gray, aisles about shoulder-width apart that we’re stocked full with whatever you would need, right down the VHS tapes and canning supplies.
Bob had run the store the past 43 years. He said he kept the gas pumps out front from the 1960s because he liked it. He said it really confused the kids. 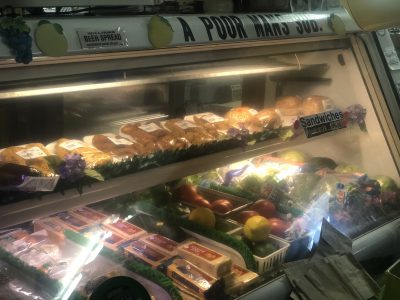 There was a glass deli counter up front full of meats and cheeses, ice cream could be scooped by hand and, in typical Otten fashion he discounted the price of a sandwich.
Canned products were hand stamped. Matter of fact, all products carried a hand stamp.

Bob’s Stop & Shop did not carry tobacco products. But he did have beer and a series of wallet-size photos of grandkids lining every bit of open space along with clever clippings and signs. There was zero empty wall space or counter space; there was a kid photo, canned good or homemade sign at every turn.
Asking Bob what town was ahead he rattled off a series in success and then said, “If you stub your toe on the railroad tracks you’ll fall out of town.” 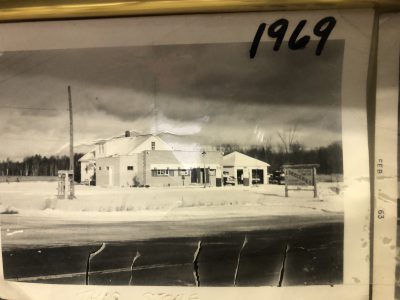 Bob gave me a little message in a small plastic baggie as I left.  Click HERE to watch. 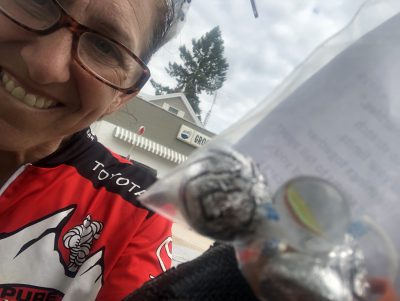 Contents: An eraser so you can make all of your mistakes disappear, a penny so you will never have to say I’m broke, a marble in case someone says you’ve lost all your marbles, a rubber band to stretch yourself beyond your limits, a string to tie things together when everything seems to fall apart, a hug and a kiss (chocolate) to remind you that someone somewhere cares about you.
Women of Newberry 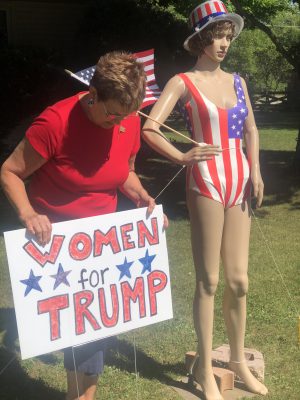 Fought the strong headwinds north into the small, but patriotic town of Newberry and I met Alice Schroeder who loved President Trump and wanted everyone to know about it.
Schroeder was straightening her handmade lawn signs, which were a little cattywampus from the strong south winds.
“I got the mannequin June 29 for my birthday,” said Schroeder. “It was a gift from my daughter; the mannequin was already wearing the red, white, and blue swimsuit.”
Schroeder was dressed in a red shirt accessorized with a sparkly USA flag pin and red, white and blue earrings.
“The president just stands for everything I believe in,” said Schroeder. “God, the Constitution, middle class values, the Second Amendment, and family values.”
As we talk under the shade of trees in her front yard people drive by, pull over, roll down their windows and snap photos of the display. 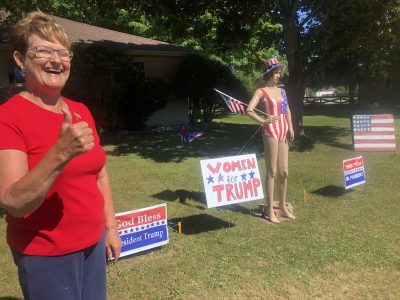 It happens multiple times.  “I just felt there was more I could do…. so I made this,” said Schroeder. “So far it’s been well received.”
A note of thanks to Trinity Lutheran Church 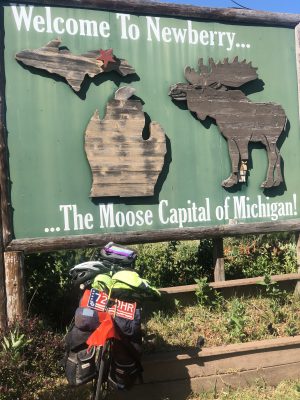 Entering moose country as Newberry touts itself the Moose Capital of Michigan!
Fun – there’s even a “moose sightings reporting station” at a gift store downtown. 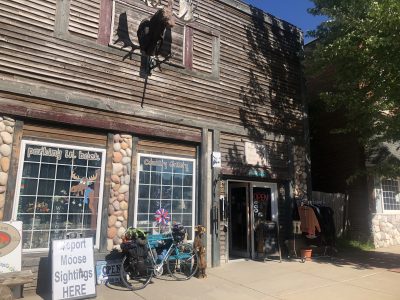 The clerk points out a white map with an array of colorful stickpins. “So far the season has been slow… but we’re just getting started,” she said. “The moose sightings can be pretty rare as they actually like to stick to the swampy areas.”
Seeing a moose clomp through the middle of town is not commonplace. 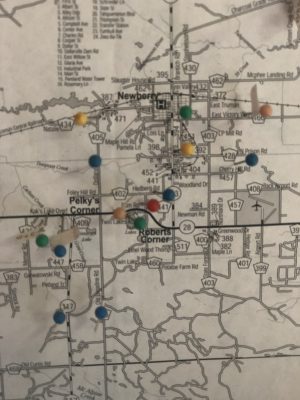 A familiar face far from home as the pastor at Trinity Lutheran Church in Newberry is none other than Kyle Kuehl of West Bend. Kuehl is a graduate of Living Word Lutheran and Concordia College. He went to seminary in St. Louis and has been heading up the parish in Newberry the past three years. While the weather remains sunny, temps this morning started at 52 degrees. There are strong southern winds as I move north, and neighbors say the next 60 miles is expected to be a bit of a grind. 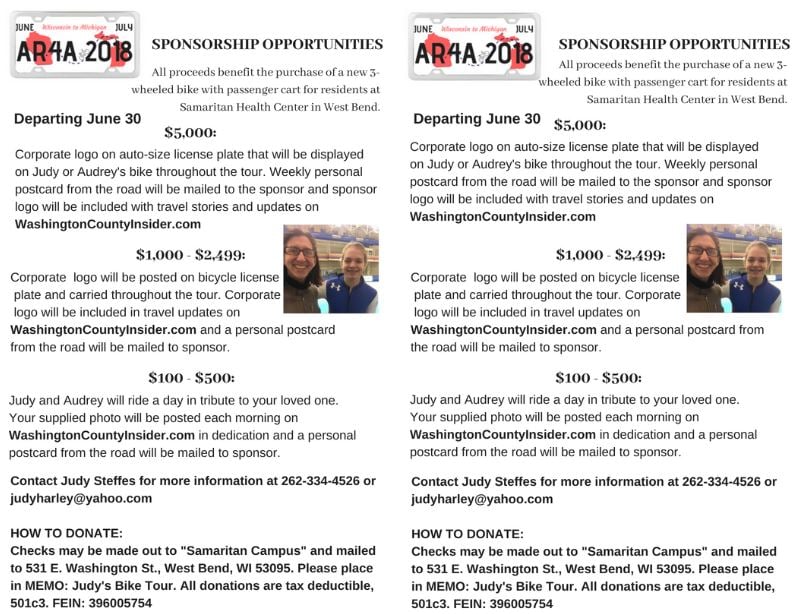