Home
»
Behind the scenes of the West Bend Christmas Parade 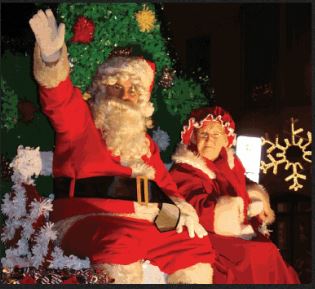 There have been quite a few memorable parades. Police captain Toby Netko is on the Parade Committee and he remembered 2007 and the “year of the big snow.”

“It was so bad the Department of Public Works came out and plowed the route prior to the parade,” he said.

Netko also remembered the huge balloons, like the ones used in Macy’s Thanksgiving Day Parade.

“For several years we rented balloons,” said Mike Husar with the Parade Committee.

“We used the same balloons as Grafton because we could get them in their parade on Saturday and then they’d come to West Bend on Sunday; the only one I remember is a big star,” he said.

The West Bend Parade eventually stopped using the big balloons because of cost and the logistics of getting handlers to hold them down.

“My real memories are when my dad was running the parade back when I was a little kid,” said Husar recalling how all the clowns would get dressed in the back of the jewelry store and Paul Lemler from Amity would paint the faces on them.

“The clowns handed out popcorn balls and all those were in our store so I would get to eat a bunch before the parade,” said Husar.

“I also remember my dad driving Santa around in our car. It was cool to think Santa would let my dad drive him to the float.

“When I got older my dad would bring the Santa float to our house and I had to put all the lights on and make sure the sound system worked.”

In 2005 Santa’s appearance in the parade was almost jeopardized after the float, pulled by the Daily News, got a flat tire right before the parade stepped off.

The Kettle Moraine Sport Riders saved the day as the local motorcycle club volunteered its float. The Sport Riders did a quick makeover, cutting a hole in their display so Santa and Cassidy Stodila from Jackson Elementary School could still ride in the parade.

Stodila was on board having won a writing contest sponsored by the Daily News.

Big Foot made an appearance in the 2006 Christmas parade. Sasquatch was sponsored by Jeff’s Spirits on Main after a man claimed earlier that month that a 7-foot-tall “animal” had taken a deer out of the back of his pickup truck at about 1 a.m. on Highway 167 near Station Way by Holy Hill.

The man had been contracted by the State Department of Natural Resources to pick up road kill.

He said the large black animal, was bigger than a bear and referenced Big Foot during his conversation with  police.

Some of the more popular recent entries have been the Cubs Scouts that scurried around picking up popcorn tossed from a float with hand vacs. There’s also the alpaca llamas dressed in costume with fake hands holding choir books and last year’s entry by the Jail House Restaurant featuring a live gingerbread man that sat on the end of the chute on a cement truck.

This year’s parade theme will be “Let it Snow.”

The parade steps off Sunday at 5 p.m. from Regner Park.