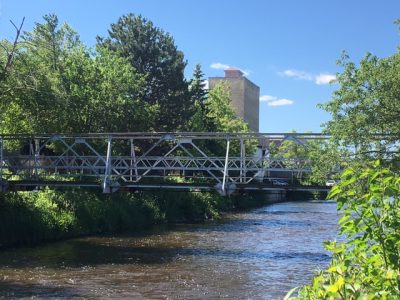 The bridge being replaced is sometimes referred to as the Mountain Outfitters bridge. The project is part of the overall $1.5 million plan to revamp the river walk.

Park and Rec director Craig Hoeppner said the new south bridge would come in around $64,000 but then installation, bridge supports and concrete would bring the total to about $125,000. 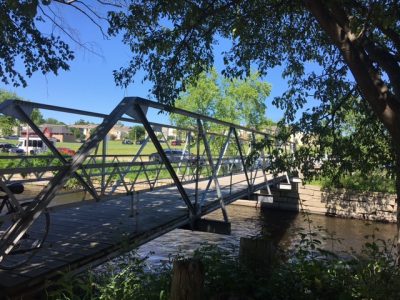 Hoeppner was encouraged by the BID support. He said they wanted to “capture the timing with DNR grants” to help pay for the project. He said the goal now is to “keep momentum going.”

Mayor Kraig Sadownikow and city administrator Jay Shambeau are helping spearhead an effort to recruit outside private funds for the project.

At one point in the BID meeting, board member Peggy Fischer suggested the BID increase its donation to cover the entire $64,000. Larry Porter echoed her thought.

“The BID has the growth potential to make a larger commitment to the river walk,” he said. “We can afford a bigger commitment.”

The final vote on $50,000 for the bridge project was approved 3 – 2.  Board members Herb Tennies, Brian Culligan and Wayne Kainz were absent and Adam Williquette abstained.

Voting in favor were John Hafeman, Mike Husar and Tony Jasen.  The two discenting votes were Fischer and Porter.

The BID discussed a number of other items at its Tuesday meeting including the success of a recent cleanup of the flowerbeds and the success of its marketing plan with the DIVA group.