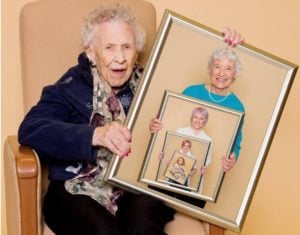 Blanche Schuelke passed away Tuesday morning, July 26 at the age of 109. Her family said she passed comfortably and at peace.

“I’m so sad that she’s gone but very excited for her to see my grandpa, her parents, and her childhood dog named Mimsie,” said granddaughter Elizabeth Grimm. “I smile thinking about how she is with her grandfather of whom she called her best friend.”

Schuelke lived her entire life in West Bend.  She built a house on S. Eighth Avenue and worked at the original art museum.

“Grandma was an angel on earth for us all and will continue to be in heaven,” said Grimm.