October 7, 2019 – West Bend, WI – Condolences to the Walden family as Bob Walden, owner of Walden – A Supper Club, on Wallace Lake has died. 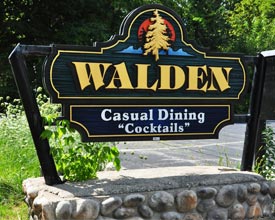 Walden was 76 years old. He and his wife Karen owned the supper club on the south short of the lake for 30 years.

“Bob purchased the restaurant in 1989,” said Karen. “It used to be Benike’s before we got it. George and Carol Benike purchased the club from Dot who ran it as Dot’s Club.”

Dot and her husband Nick added the cocktail lounge in 1974.

Lee Stehling from Ace Canvas worked on the bar rail at Walden’s. “Bob was the classiest guy to deal with,” he said. “He was such a great customer and the supper club was part of the fabric of the community. Who hasn’t been to Waldens? This is a sad loss for this area.”

Dennis Fechter from the Boltonville Fire Department said he’d run into Bob regularly at The Copper Penny. “He was a guy who would always take the time to say hi,” he said. “Nice guy.”

Bob worked in education at the start of his career. He was principal at Jackson Elementary School about 40 years ago.

David and Nancy Slinde lived down the block from the supper club. “Bob has been a great neighbor on Wallace Lake,” said David.  “He had an understanding of his customers by offering a familiar setting and great food.  His restaurant is a historic place in the Barton community.  While many said he should do this with the building or that with the building, he stayed firm in offering the community a historic supper club pure and simple and rich in memories.”

Neighbors across Washington County are familiar with the supper club that sits on the south shore of Wallace Lake.

Walden is available for larger group luncheons and for banquets depending on availability. Several weddings followed by wedding banquets have been held along the shores of the lake.

The dining room seats up to one hundred guests. the cocktail lounge, overlooking the lake seats 52 people at the bar and side bars.

Details on the funeral arrangements are still pending. More information will be posted as it becomes available.