City of West Bend drops debt from $84 million to $42 million …. and road repairs are on the way

He’s more than well aware it’s not a sexy topic, but it is significant especially when taxpayers look back on where the city was eight short years ago. 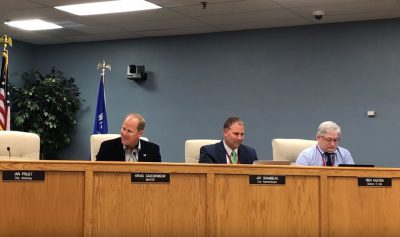 On top of that multi-million dollar reduction comes a new policy the common council hopes will act as a good financial playbook for years to come.

During the April 1 council meeting aldermen unanimously adopted a new debt management policy that recognizes the city’s concerted effort to pay down debt.

“It does not bind and cannot bind future councils to borrow money or make financial decisions,” Sadownikow said. “What it can do is put a policy in place that recognizes the work that’s been done the last eight years to reduce the city’s overall debt.” 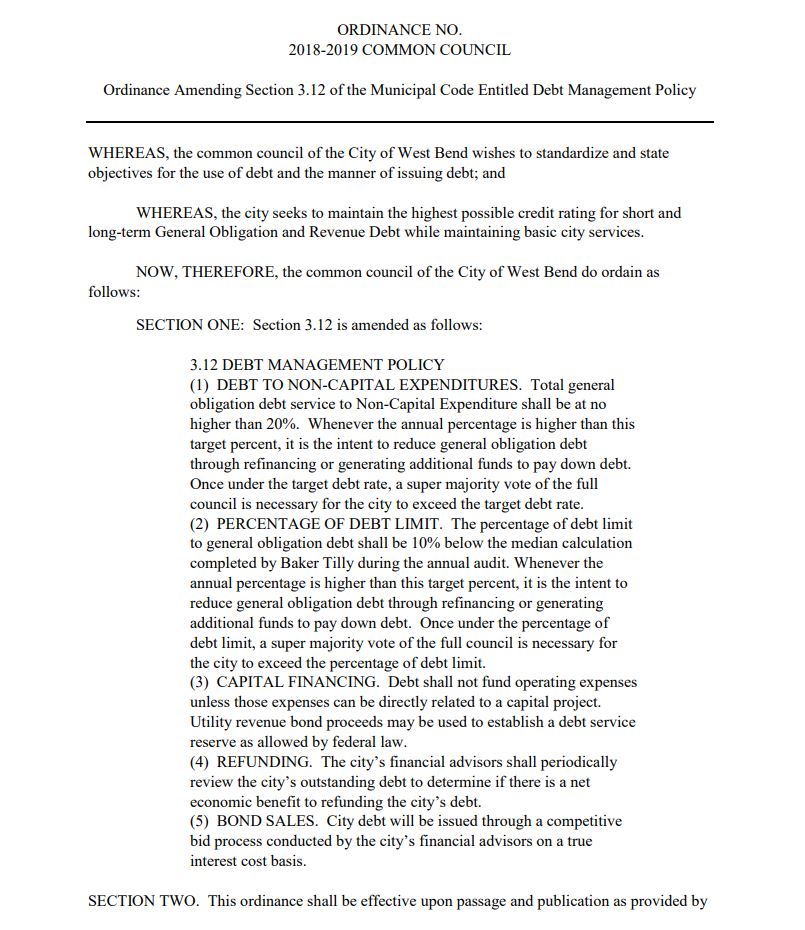 “Our goal is not just to be in the middle but to be a minimum of 10 percent better than that,” said Sadownikow. “If we want to develop a new industrial park, we may have to go into debt for a period of time to do that but the policy requires a public two-third vote to make that happen.”

The overriding theme of the policy, according to Sadownikow, is communication with the community.

“The idea is complete transparency,” he said. “Open discussion and community involvement, education, and advanced knowledge will be taking place if we’re going to break the debt policy.” 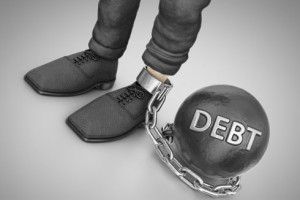 Sadownikow said the reason they adopted the new debt management policy was because city leaders realized how hamstrung they were with $84 million in debt.

“I get people in the grocery stores and others coming up to me saying ‘you can’t cut taxes forever.’ Well, part of that is true but, just like at home if you pay off your house you suddenly have $500 or an extra $1,000 or $2,000 to spend on other stuff…  that’s what we’ve been able to do in West Bend,” he said.

Reducing the debt, according to Sadownikow, means about $3 million to $4 million in principal and interest payments that the city can now use to invest back into employees, parks, and roads.

“We wanted to gain more financial independence to make other decisions around the community,” he said.  “Zero debt is a good idea but very few of us can own a house or a car if you didn’t utilize your own common sense and fiscal management.”

Not only did the city knock off some serious debt over the past eight years, it also built up its fund balance.

“We had about $1.7 million in cash reserves and we were well below the Moody’s bond rating agency recommended level,” said Sadownikow. “We have more than tripled our reserves now; we’re up near $6 million and we’re well above the Moody’s minimum level and this year or next we should hit the recommended level.” 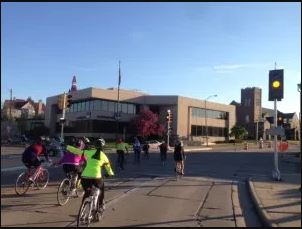 By reducing debt the City of West Bend has more financial freedom to cover infrastructure costs including road repair.

The key was slashing the city’s capital projects budgets for about four years or five years.

“We looked at road funding and invested in the most critical roads first, knowing we couldn’t wait forever but we were at an interesting time where a lot of debt was going to be paid off,” said Sadownikow. “So instead of borrowing ahead of the debt being paid off we waited until it was paid off, freed up some cash so now we can reinvigorate the capital projects budget.

The 2018 City of West Bend budget has $3 million for capital projects; $2 million are earmarked for road maintenance.

“When I was elected in 2011 that number was $750,000 earmarked for road maintenance,” said Sadownikow.  “Additionally, we believe Seventh Avenue will get done in 2020 or 2021 and completing 18th Avenue in 2021 or 2022 will really give us the north /south routes we need. We can do those two large projects while still paying off more debt than we’re taking on.”