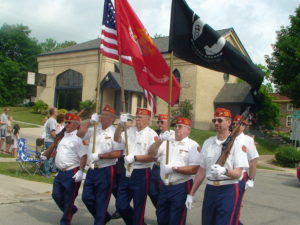 Line up for the parade will be on S. Main Street between Oak Street and Decorah Road between 8:15 a.m. and 9:15 a.m. with the parade stepping off at 9:30 a.m. sharp.
The parade will end on Sixth Avenue and Poplar Street at the Memorial Plaza just north of the old Washington County Courthouse.
The program is scheduled to begin at approximately 10:30 a.m. In case of inclement weather, the program will be held inside the Old Courthouse Museum. 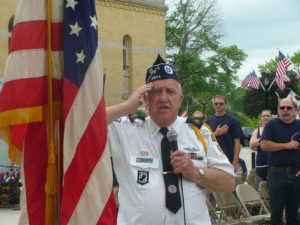 Invitations are extended to groups who have participated in previous Memorial Day parades. Anyone wishing to take part should contact Steve Rhode at 414-581-4381. Those owning a military vehicle are welcome to participate.

“The purpose of the Memorial Day parade and program is to honor those who have made the ultimate sacrifice for our country,” said Rhode. “Therefore there will be no commercial advertising or tossing of candy.”
The Memorial Day Program pays honor to the veterans of the Civil War, Spanish-American War, World Wars I and II, the Korean War, Vietnam, Desert Storm and the present Iraq and Afghanistan conflicts.  Veterans will remain after the program to talk to those attending.
Seating is limited. Those wishing to attend are encouraged to bring their own chairs.
Boy Scout troop 780 will again be selling brats, hot dogs and soda at the Plaza.