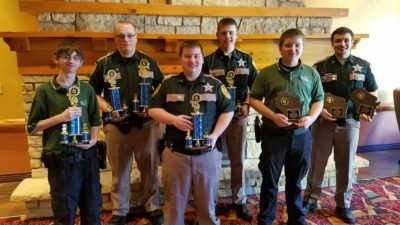 The Dodge County Law Enforcement Explorer Post was very successful and brought home eight trophies and awards including a first place teams finish and first and third place for the Presidents Award.

What a huge accomplishment for these young men and women who all have a bright future ahead of them as future law enforcement officers.  Below are the awards they received.

The event is hosted by the Wisconsin Law Enforcement Explorer Advisor’s Association in partnership with many different state and federal agencies including the FBI, U.S. Customs and Border Protection, the Wisconsin Department of Justice Division of Criminal Investigation, the Wisconsin State Patrol and many sheriff’s offices and police departments.

Sheriff Dale Schmidt and the other advisors of the Explorer post are extremely proud of the work these Explorers do in preparing for a better future and being involved in their community.

Additionally, the Explorer post held its annual awards night and Explorer Lieutenant Easton Meier and Explorer Sergeant Scott Anderson were named 2016 Co-Explorer of the Year.  They were each awarded a $200 scholarship.  Explorer Coby Schultz was awarded the 2016 Explorer Post Rookie of the Year.