July 31, 2017 – Washington Co., WI – The crowd on the hill soaked up the sun on the final day of the Washington County Fair and watched some mighty tractors – antiques and John Deere’s and Gehl’s – pour black smoke and chew up the track during the annual Truck and Tractor Pull. Bill Hinckley and his team oversaw the show. “We had 74 hooks on the antique tractors that lasted a little over 2.5 hours and the truck and tractor pull for the second show was a 2.5 show,” said Hinckley. “There were more people watching the second show than the first but there was also more noise and smoke.” Two trucks had to be pulled from the track due to a broken drive train. All in all it was a very good show. 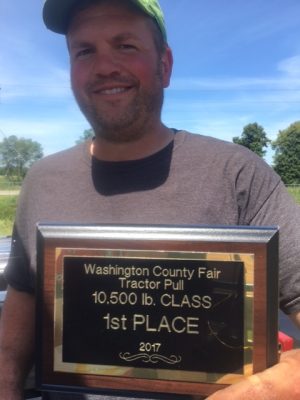 Still waiting on final results from the second show.