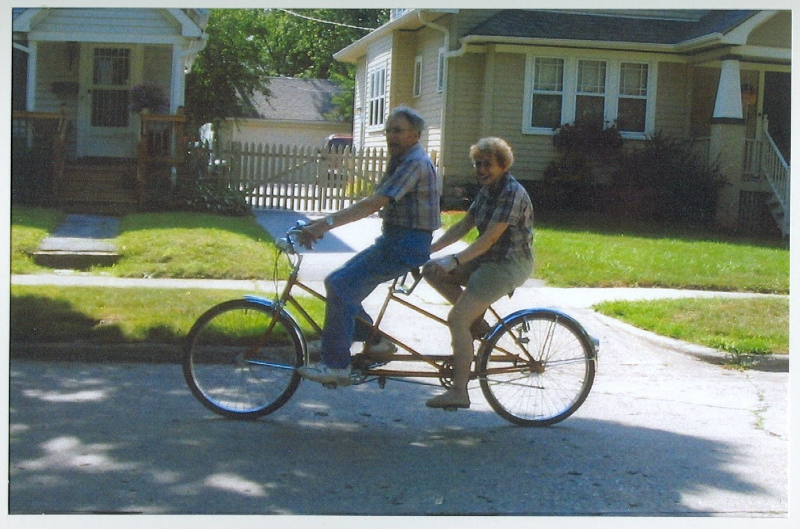 I was combing through my archives of Around the Bend and found this gem from 2006 when my parents were living in the Milwaukee area. They were much younger at the time meaning my dad was in his 80s. The family had just presented them with a tandem and here’s the story that followed.

Several weeks ago I wrote about delivering a single speed orange tandem to my parents in the Milwaukee area.  My 83-year-old father was the one who asked for the bike.

Since then my Mom’s been keeping me posted on their progress.  They reportedly started slow, working on balance and coordination, signals and patience.   My Mom said they’re actually turning a lot of heads.  “And we’re starting to pass the walkers,” she said cheerfully. Speedy,  I chided as my Mom started to talk about the catcalls.

“One young man ran past us and shouted “Schwinn Twinn,” said my Mother amused and amazed someone would know the make and model of the bike.   “Then he said something like COOOL and TRAVEL ON.”

“Are you sure he didn’t say “Don’t fall down,”  I asked knowing my mother was hard of hearing.

“Another time there were five young boys biking towards us,” said my Mom. “They pointed and yelled, “Look at the dynamic duo.”   I’m hoping my parents don’t start wearing capes and crime fighting.

I tried explaining how the bike was unique.  “You’re actually antiques riding an antique,” I said reminding her to always lock the bike.

“We were headed down to Veteran’s Park the other day to watch the kites by the lake but Dad said he was having problems with the seat.” Apparently my Dad has been blessed with the old man’s no-flab butt and he needs more cushion on his saddle.  “I told him before we left that he should just shove a pillow down his pants,” said my mother the problem solver.

I can just see it, my German father down at Milwaukee’s lakefront with his long sleeve flannel shirt, fishing hat, and junk in the trunk.  He’d be walking with my very small mother.  They’d be cute.  Two old people holding hands and my Dad’s red, corduroy throw pillow riding up the back of his pants.