It was 1957 when Braeger traded in her old car, put $2,250 on the counter and drove away from King Braeger in Milwaukee with her black Chevy with whitewall tires and rich red interior.

Over the years Braeger could be seen motoring around West Bend and she was an avid participant at local car shows.

In August 2011 Braeger got some time in the media spotlight when she used her warranty and to get another new muffler for her vehicle.  That ’57 Chevy actually has two mufflers and Midas took pride in honoring the warranty. 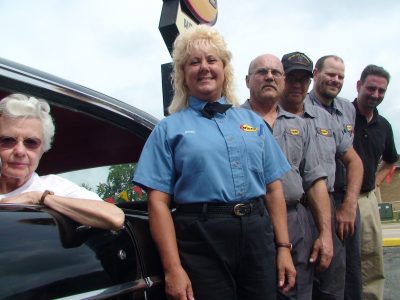 Braeger even had the original warranty from June 15, 1962. 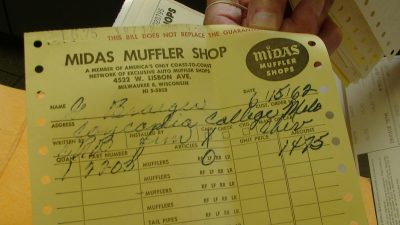 Midas offers a lifetime guarantee on brake pads, shoes, shocks, struts and mufflers for as long as you own your car.

On Monday the company lived up to its promise.

“They’re a good company, they stuck to their word,” said Braeger. 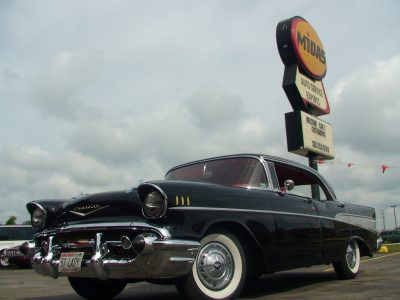 Midas store manager Linda Pyka said the company has worked with Braeger over the years. She said they had to jump through a couple hoops this time.

“Grace called me about a month and a half ago; I special ordered the muffler from New Jersey and it finally arrived and last week,” said Pyka.

The 1957 Bel Air has a duel-exhaust system, which means the car has two mufflers.

Braeger has turned 117,100 miles on the car and she has been through at total of 23 mufflers; 21 have been free of charge. 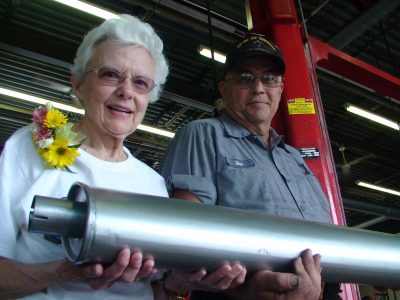 Midas had to prepay $105 for the special muffler, which was installed by mechanic Donald Egerton.

“Donald is the oldest mechanic in the shop at Midas so he was given the privilege of working on the vehicle,” said Pyka.

Edgerton is 60 years old, a Vietnam Veteran and a Midas employee for the last 25 years.

“I just like to look at it,” he said of the vehicle.

Midas celebrated Braeger and her muffler – pinning a white-rose-and-tiger-lily corsage to her lapel and presenting her with a gift basket which included a red die cast ’57 Chevy Bel Air with a yellow and black Midas decal stamped on the top.

During her last muffler change, Midas presented Grace with a yellow and black muffler / scarf. She had that along with her, still wrapped in the original plastic.

If anyone is interest in purchasing Braeger’s car, serious buyers with a fair price can contact her at [email protected]